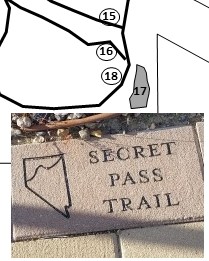 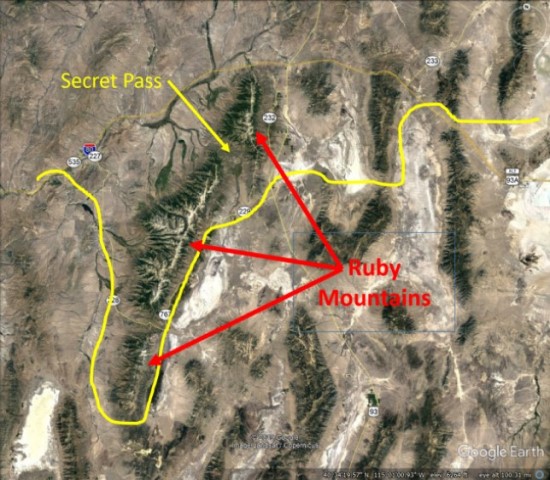 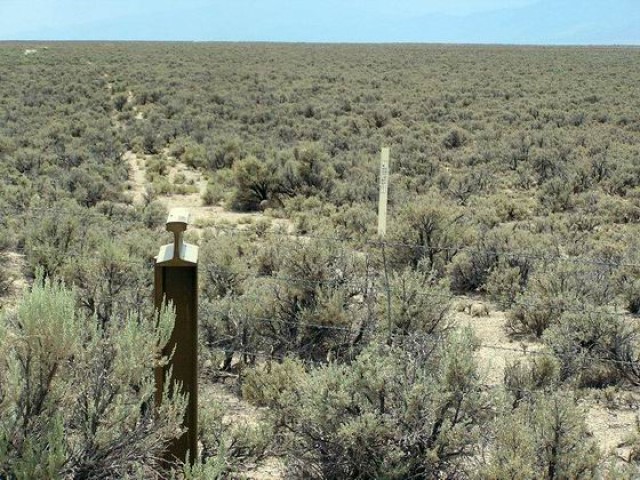 Looking west across Ruby Valley from T-Marker HN-15, just past the "spur" which hides Secret Pass. Photo by Bob Black. 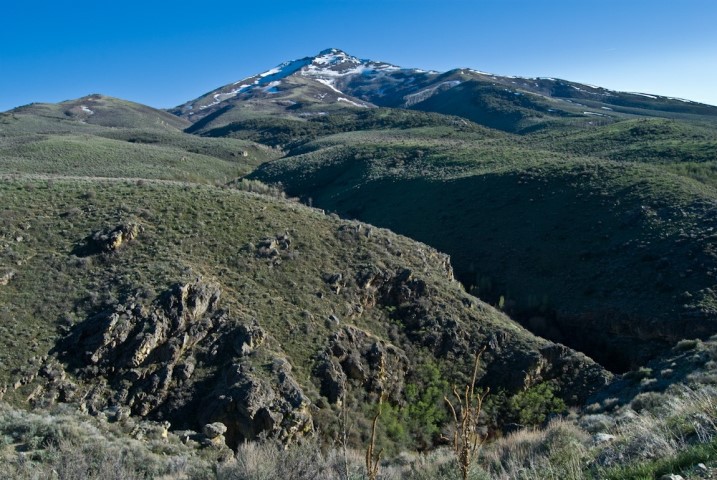 This pass acquired the name of "Secret" because of its placement in the Ruby Mountains. As you approach the mountains along the California Trail from the west it is plainly visible. However, as you approach the range from the east, there is a spur of the mountains which juts toward the south and prevents the pass from being seen until you have traveled quite a distance south, and even then it is not apparent looking back toward the north.

In April of 1846 Lansford Hastings rendezvoused at Johnson’s Ranch, northeast of Sutter’s Fort, with his old friend James Hudspeth who had traveled with him on their 1842 overland trip to Oregon, and the old mountain man James Clyman. They were going to conduct an exploring trip east to fulfill Hasting’s scheme of finding a new, more direct route for drawing thousands of emigrants to California. On May 21, 1846 the Hasting’s party arrived at the location near Halleck, Nevada on the California Trail that Lt. Talbot and some members of Fremont’s Third Expedition had reached by going through Secret Pass the previous year. The next day, after Hastings had convinced Clyman that they should check out the route to Salt Lake, the party headed east through Secret Pass and eventually made their way to Fort Bridger. At this point, Clyman parted company with Hastings and Hudspeth. Still determined to carry on his plan, Hastings hurried eastward to the South Pass area to recruit westbound emigrant parties willing to try his untried “Cutoff.”

In mid-July, 1846, three wagon trains and the Bryant-Russell pack party showed up at Fort Bridger to take the new cutoff trail. After leaving Fort Bridger, Hastings and James Hudspeth (who was assisting Hastings as a guide) scurried back and forth between the three wagon companies and the packing party as they did their best to guide them to the valley of the Great Salt Lake. After arriving safely there, the next leg of the journey was west across the salt flats to Donner Spring located just east of Pilot Peak. After a difficult trip across the Salt Lake Desert, the emigrants recruited their livestock at the spring and took a short rest before the next leg of the journey. From Pilot Peak, Hastings guided the wagons generally west and along the route of the 1841 Bidwell-Bartleson Party as he went from spring to spring over to Ruby Valley which was located along the east side of the Ruby Mountains. Since Hastings did not think he could not take the wagons over Secret Pass in the Ruby Mountains, he was forced to swing around their south end and cross over them at Overland Pass. Next he led the wagons north along Huntington Creek to the South Fork of the Humboldt River, down through the South Fork Canyon and finally tied in to the California Trail along the main fork of the Humboldt River near the location of the California Trail Interpretive Center.

Based on an article from https://emigranttrailswest.org/