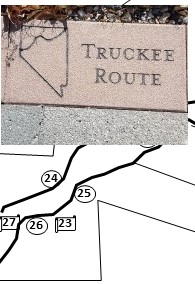 The Truckee Trail, as the Truckee River Route of the California Trail is called, is historic in that it was the first wagon road opened over the Sierra Nevada. It was opened in 1844-45 by the Elisha Stephens party which consisted of 11 wagons, 26 men, 8 women and 16 children. This party was guided by Caleb Greenwood, an old mountain man, who was assisted at a critical time near the Humboldt Sink by a Paiute Indian chief who the emigrants called “Truckee.”

When the Truckee Trail leaves the Sink area, it enters the most difficult terrain that the emigrants would face on their entire journey along the California Trail. The first obstacle was the extremely dry, hot, sandy and desolate country of the Forty Mile Desert. The only water along this terrible stretch of trail to the Truckee River was the alkaline impregnated hot springs located about midway through this water-less stretch.

Upon reaching the river at present Wadsworth, Nevada, the trail continues west as it follows the river through a long, narrow, rocky canyon that required crossing the river many times. These river crossings were the second obstacle. Soon after the 22nd crossing, the canyon opens up into Truckee Meadows. Here the emigrants found lush forage, adequate wood and plenty of water. This location provided an opportunity for them to recruit themselves and their nearly-dead animals before taking on the “Elephant” that lay shortly ahead.

From the Meadows, the trail soon jogs north to pass through Dog Valley before returning to the river at present day Truckee. At this point, the emigrants really saw the “Elephant” as they faced the third obstacle which was the formidable task of crossing the Sierra over Stephen’s Pass. Once across the summit, the journey down the rocky, steep, heavily-timbered ridges and along the boulder-strewn streams was the fourth and last obstacle although travel was still very difficult until their destination at Johnson’s Rancho in the Sacramento Valley was finally reached.

The Elisha Stephens party had proved that there was a viable wagon route over the Sierra Nevada into northern California but it took further overland emigrant parties, later in 1845 and in 1846, to work out the final wagon route alignment from the Truckee River to the Sacramento Valley.

By 1850, because the travel on the Truckee Trail was so difficult, it was seldom used. Most of the western migration traveled on the newly opened Carson Trail.

You may also be interested in exploring the Trails West markers along the Truckee River Route as described in this app.