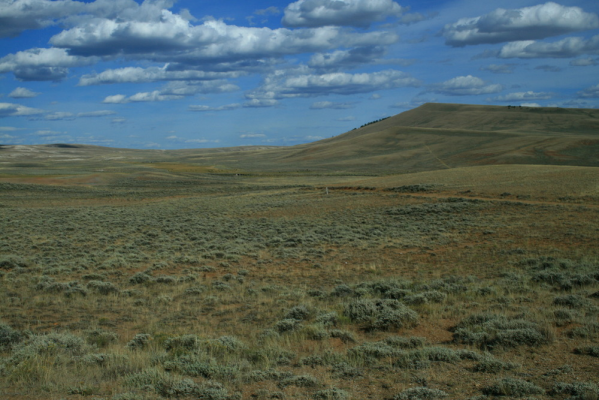 We then traveled up a long, gradual slope, or plain, free of rocks, trees, or gullies, and came at half past eleven o'clock to the summit of the South Pass of the Rocky Mountains. We could hardly realize that we were crossing the great backbone of the North American Continent at an altitude of seven thousand four hundred and ninety feet, the ascent was so smooth and gentle, and the level ground at the summit so much like a prairie region, that it was not easy to tell when we had reached the exact line of the divide. But it is here that after every shower the little rivulets separate, some to flow into the Atlantic, the others into the Pacific. It was a beautiful, warm, hazy day. Near the summit, on each side of the road, was an encampment, at one of which the American flag was flying, to mark the private post-office or express office established by Gen. James Estelle, for the accommodation of emigrants wishing to send letters to friends at home. The last post-office on our way was at St. Joseph, on the Missouri River.... To see the old flag once more strongly reminded us of home. There was a hailstorm at noon, but that did not prevent the assembled company from having an off-hand celebration of our arrival at the summit. Music from a violin with tin-pan accompaniment, contributed to the general merriment of a grand frolic. In the afternoon we spent some time in writing letters to our friends, to be sent back by the express. On each letter we paid as express charges $1.00. The returning messengers delivered the letters to the postmaster at St. Joseph, and in due time they reached their destination, one thousand four hundred thirty-eight miles distant.

The marker in the map below shows the site of a set of historical markers erected at South Pass, WY.

Next Site
Return to Map Page