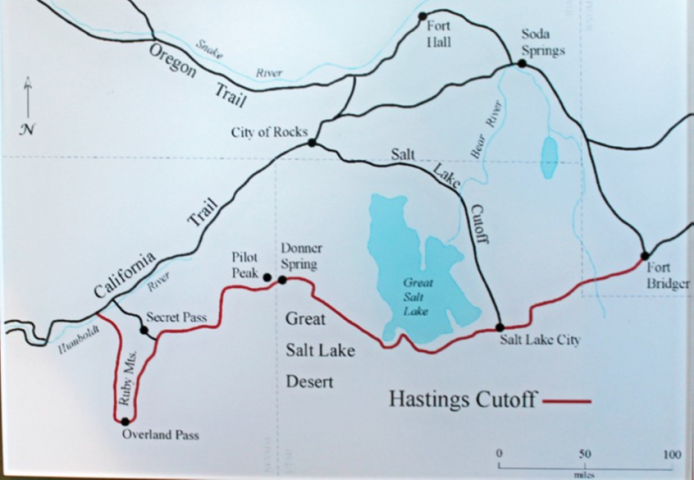 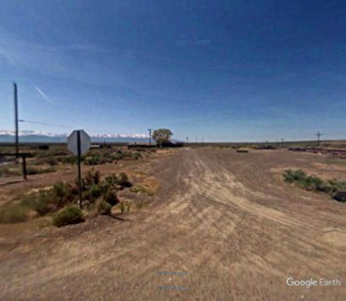 Drive eastbound on I-80 for 30 miles. Take exit 321 to Halleck/Ruby Valley. At the end of the off-ramp, turn right onto NV-229 E. Drive on NV-229 E for 0.9 miles. Slow down when you see a railroad crossing. Turn right 30 feet past the railroad crossing onto a dirt road. You will see a house and a few structures shaded by a tall tree. Park your vehicle on the side of the road just beyond the tree and buildings and look for the Trails West “T” marker.

It’s hard to believe, but Halleck was once a thriving cattle and railroad town with a population of 600. It is named after General Henry W. Halleck, who served as general in chief of all Union forces during the Civil War until being replaced by Ulysses S. Grant. Before the town and the adjacent railroad tracks were established, the California Trail traveled directly through this site.

Look to the East behind the buildings at the two most prominent mountain ranges in the area. The range on the right is the Ruby Mountains. To the left is the East Humboldt Range. In between the two ranges is a gap called Secret Pass. Mule pack trains taking the Hastings Cutoff from Utah (more about this later) shaved 80 miles off their trip by using this pass. The pass was too steep and rugged for wagons, forcing those groups to travel 60 miles further south to Overland Pass to cross the mountains. The location you are at right now is the junction of the main California Trail and the pack train route through Secret Pass.

From 1846 to 1850, thousands of emigrants took the infamous Hastings cutoff, which runs along the other side of these mountains and links up with the main trail near the California Trail Interpretive Center. The cutoff was promoted by businessman and guidebook writer Lansford Hastings as a shortcut on the California Trail. Instead, this disastrous route was over 100 miles longer than the main trail, required emigrants to drive through rugged canyons in the Wasatch Mountains, and worst of all, forced wagons to cross 80 miles of the inhospitable Salt Flats in western Utah. After traveling south for several days along the base of the Ruby Mountains, pioneers became furious when they realized they had to travel several days north along the same mountain range after going over Overland Pass. By the time they reached the main trail, emigrants learned that they had spent at least an extra week travelling on the “cutoff” compared to the main trail. The doomed Donner-Reed party of 1846 became trapped in the snow covered Sierra Nevada Mountains largely due to the delays they experienced on the Hastings Cutoff. After the tragedy, survivor Virginia Reed wrote to her cousin about the trail stating “…hurry along as fast as you can and never take no cutoffs.”

Fort Halleck was located 12 miles southeast of here at the base of the Ruby Mountains. Established as a camp in 1867 and eventually built up into a fort later on, its primary role was to protect emigrants and Central Pacific railroad builders from attacks by native tribes. Though based in Shoshone territory, soldiers from Fort Halleck fought in wars against the Modoc, Nez Perce, and Apache across the West during 1870s and 1880s. Fort Halleck was decommissioned in 1886 and dismantled in the following decades. Little remains of the fort today. Though the fort is gone, it remains in memory as a symbol of Euro-American encroachment on Native American culture and territory.