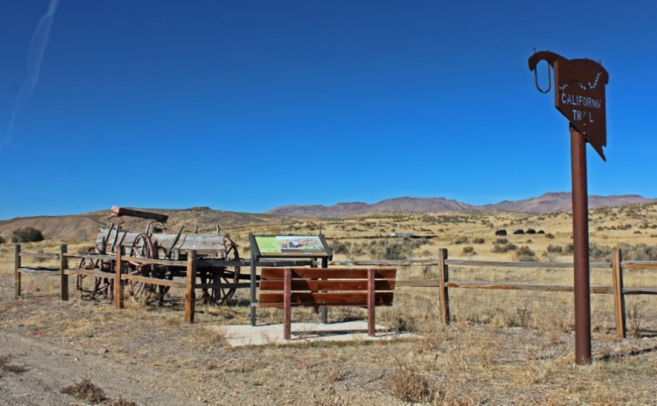 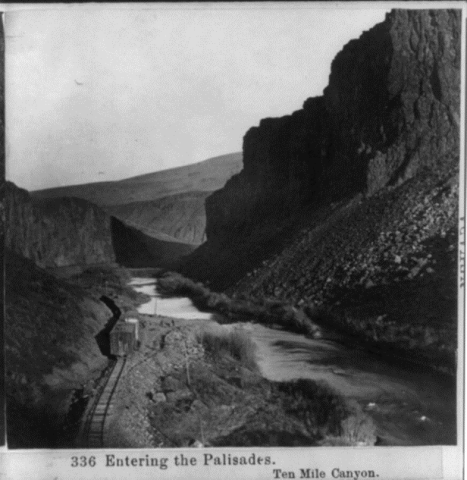 Palisade Canyon in 1869. Photo by Alfred Hart. Library of Congress.

Exit Carlin Canyon the way you entered it. Drive down Chestnut Street for 6.25 miles. You will drive through and beyond the town of Carlin. When you reach the intersection for NV-278 turn left. Drive 1.25 miles to the intersection with Tamero Road. If you drive over the RR tracks you have gone too far. Turn right onto Tamero Rd and you should immediately see an old wagon and a few interpretive panels. Park here and you have made it to the final stop. The “T” marker is on the opposite side of the road from the wagon.

After leaving Carlin Canyon or finishing the Greenhorn Cutoff, emigrants would often camp in the river bottom lands near where the town of Carlin sits today. This was a chance for them to recuperate their animals in a spot with plentiful grass and decent water before the steep climb up to Emigrant Pass.

Just a few miles beyond stop #506, the Humboldt River flows through Palisade Canyon which is far too narrow to be passable with wagons. There is no known emigrant wagon train that successfully made it through Palisade Canyon, although some did try. In 1849, William North Steuben attempted to penetrate the steep walled canyon only to turn around and take the regular route. He wrote, “The mountains on each side of us closed upon the bed of the stream [Humboldt River] and shut out our further progress and we were under the necessity of ascending the bluffs which was a tedious operation.”

At this point in the emigrants’ journey they were faced with a very difficult eighteen mile trek up and over Emigrant Pass to avoid Palisade Canyon. Roughly paralleling I-80 the emigrants faced a steep ascent to the top of the mountain range and then descended to meet the Humboldt River again at Gravelly Ford. This route offered only a few small springs to water their livestock and the road was rocky, steep, rough and difficult to travel. In 1850, Finley McDiarmid wrote, “Our road over the mountains was hilly, dreadful dusty, stoney, and remarkably cut up, tiresome to the teams and hard on the wagons.” Once over Emigrant Pass, traveling across the Great Basin became more difficult for the emigrants on the California Trail. Water quality along the Humboldt worsened, grass became scarce and livestock became exhausted and weak.

Today, the main industry in Carlin is mining. During the 1960s microscopic gold was discovered in the Carlin Trend bringing new life to the town of Carlin. Several large gold mines in the area employ thousands from all over Northeastern Nevada.

We hope you enjoyed your stops along the California National Historic Trail. We wish you safe travels and “Happy Trails!”