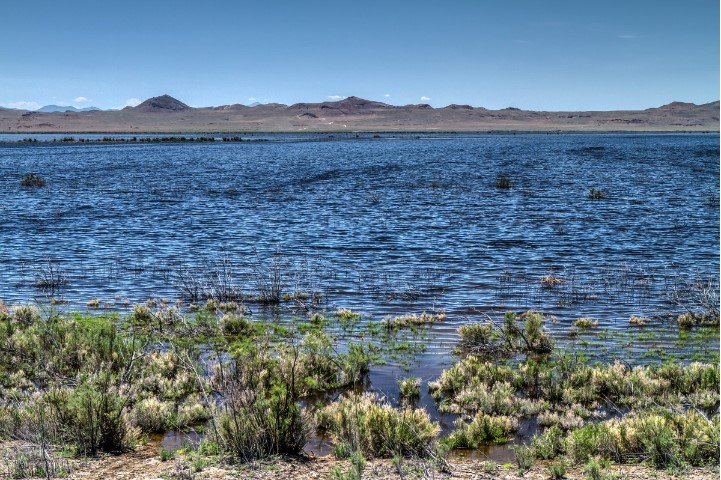 This was a pleasant morning, and we got an early start. We had gone but a few miles when we came to a man who was just unhitching his two-horse wagon to abandon it, his horses being unable to haul it any further. Mr. Frink gave him $5.00 for it, and left our cart by the roadside, for any one who might want it. We could carry more hay in the wagon, and it was large enough for some of the men to sleep in at night. It lasted us all the way through to Sacramento, where Mr. Frink was offered $40.00 for it and sold it. After this the road turned nearly south, and brought us opposite to the end or point of the mountains on our left, on the east side of the river. A broad, sandy desert opened and extended beyond them to the east and also to the south, farther than we could see. On the west, forty miles away, we could distinguish the long-looked-for California mountains, the Sierra Nevada, lying in a northwest and southeast direction. They were dark with heavy pine forests. On the plain was neither tree, shrub, nor blade of grass. In a few miles we came to where the river, along which we have been traveling for the last three weeks, spreads out on the level plain, and forms a broad, shallow lake. This lake is called the "sink of the Humboldt." One-half of it sinks into the sand, the other half rises into the sky. This is the end of the most miserable river on the face of the earth. The water of the lake, as well as that of the river for the last one hundred miles above, is strong with salt and alkali, and has the color and taste of dirty soap-suds. It is unfit for the use of either animals or human beings; but thousands of both have had to drink it to save life. We stopped near the margin of the sink, fed our horses from the grass in the wagon, and took dinner.