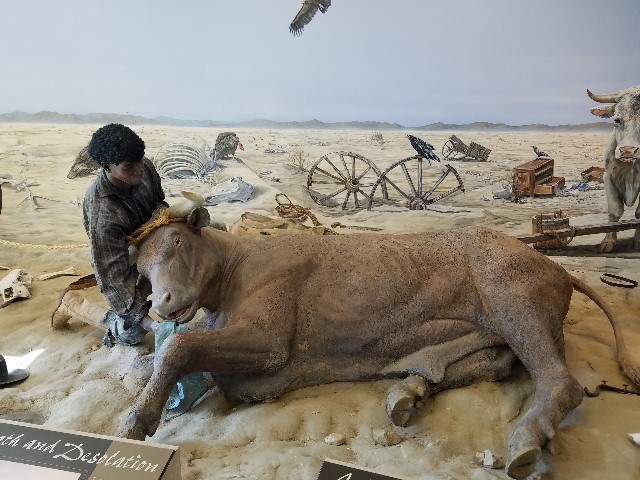 It was long before sunrise when we left camp. Our plan was to travel by easy stages, stopping often to feed and rest our horses. The early morning was cool and pleasant. At six o'clock we halted and rested four hours. We set forward again at ten o'clock and soon began to realize what might be before us. For many weeks we had been accustomed to see property abandoned and animals dead or dying. But those scenes were here doubled and trebled. Horses, mules, and oxen, suffering from heat, thirst, and starvation, staggered along until they fell and died on every rod of the way. Both sides of the road for miles were lined with dead animals and abandoned wagons. Around them were strewed yokes, chains, harness, guns, tools, bedding, clothing, cooking-utensils, and many other articles, in utter confusion. The owners had left everything, except what provisions they could carry on their backs, and hurried on to save themselves. In many cases the animals were saved by unhitching them and driving them on to the river. After resting, they were taken back to the wagons, which in this way were brought out. But no one stopped to gaze or to help. The living procession marched steadily onward, giving little heed to the destruction going on, in their own anxiety to reach a place of safety. In fact, the situation was so desperate that, in most cases, no one could help another. Each had all he could do to save himself and his animals. As we advanced, the scenes became more dreadful. The heat of the day increased, and the road became heavy with deep sand. The dead animals seemed to become at every step of the way more numerous. They lay so thick on the ground that the carcasses, if placed together, would have reached across many miles of that desert. The stench arising was continuous and terrible. The fault lay, in many cases, with the emigrants themselves. They acted injudiciously. Their fears caused them to drive too fast, in order to get over quickly. Their animals were too weak to be urged in this way. If the people generally had cut grass and made hay at the "big meadows" above the "sink," as Mr. Frink did, and hauled it with them into the desert, and brought a few gallons of water for each animal, traveling slowly and resting often, much of the stock and property that was lost could have been saved, and much distress and suffering avoided. Towards noon we came to a carriage by the side of the road in which sat our friend Mrs. Foshee. The horses having become exhausted, had been unharnessed and led forward to the river. She was awaiting their return with her usual composure. A few miles beyond we met a wagon drawn by strong, fresh horses, loaded with barrels of pure, sweet water for sale. It had been hauled from a newly discovered spring, four or five miles southeast of the road. Mr. Frink bought a gallon of it, for which he paid $1.00. After the nauseous stuff of the Humboldt "sink," this spring water was more than an ordinary luxury. Traveling slowly onward, we came to a halt at one o'clock and rested several hours, sending Mr. Rose, during the meantime, to water the horses at the spring. When he returned, which was about four o'clock, we resumed our journey. Before night we came to the wagons of the Carson boys, standing idly by the road. They told us that they had taken their mules to the spring, and having given them water, were returning to the wagons. On the way back the mules, unwilling to leave the water, became stubborn, refused to travel, pulled away from the men, ran off into the desert, and never were seen again. Part of their company, when we came up, had already gone on to the Carson River to buy more animals to bring the wagons out. It was eleven o'clock at night when we reached the river. We had been thirty-seven hours on that frightful desert. But we came through all well and without loss of animals or property. We were completely tired out, but having eaten nothing since four o'clock, we had to get supper before going to bed.