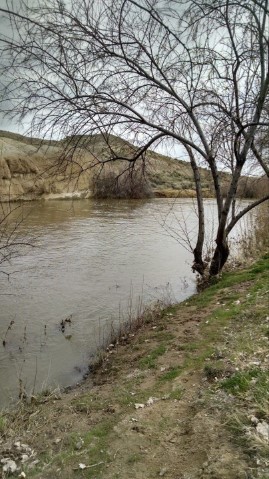 The Carson River near the August 19 resting location

The Frink party reached the Carson River on August 17 and rested on its banks on August 18. However, their difficulties continued as they made their way westward along the river.

We started on our journey very much disheartened, our horses having had but little to eat and being in sad condition. Myself and Robert picked every spear of grass growing between the clumps of bushes, and tied it up in small bunches, to try to keep up the strength and courage of the animals. After traveling three miles we stopped to water the horses, the road here leaving the river, which ran through an impassable canon. When we had traveled four or five miles beyond the canon, we became convinced that there must be grass on the river, as we had not seen any wagon tracks leading that way. So Mr. Frink sent Aaron Rose and one of Mr. Cole's men to prospect, while we kept on at a snail's pace; for the animals were so weak they could hardly walk. We soon saw Aaron's signal, and driving out to the side of the road, we unhitched the horses and sent them to the river. To our great joy, the men had found a fine meadow untouched, there never having been an animal in it. Mr. Frink and I remained with the large wagon by the roadside all day, the men having taken the small wagon with them to the meadow to fill it with grass. The men came up with a big load by sundown, at which time I had supper ready. It was a campful of happy people, to know that our half-starved animals had had so good a feed. At dark we were ready to start on a long night journey across another desert.