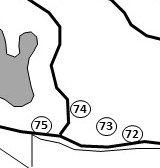 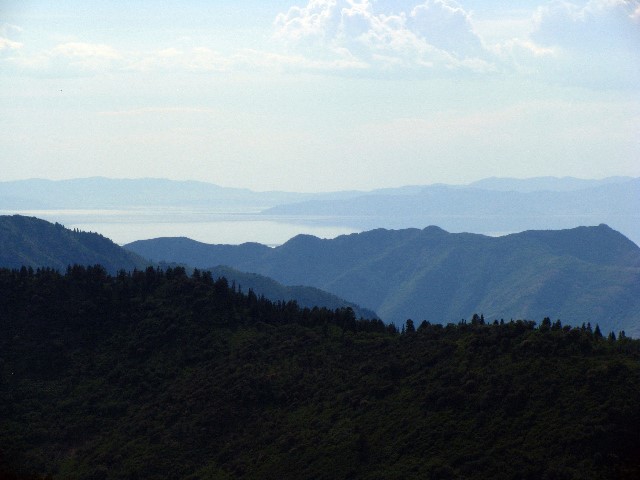 The fires in the mountains were burning with great fury all night, threatening, although probably at a distance of twenty miles, to reach us before we decamped. Burnt leaves and ashes, driven by the winds, whirled through the atmosphere, and fell around us in the valley. Mr. Hudspeth and two of the men with him left us here, to explore the cañon above, and ascertain the practicability of wagons passing through it. Resuming our march, we proceeded down the valley about ten miles, passing through, at its lower end, a grove of poplars, in which a fire had been burning, and some of the fallen trees were yet blazing... At four o'clock, P. M., we encamped on the bank of the Weber river, just below the cañon. The stream, at this point, is about thirty feet in breadth, with a limpid and rapid current, and a rocky channel. The grass along its margin is dry and dead, but well seeded, and consequently nutritious to our animals. A few small poplars, generally from two to three inches in diameter at the trunk, skirt the stream. I ascended the range of hills bordering the valley of the river to the south, from which I had a most extensive and interesting view of the Great Salt Lake. My position was about ten miles distant from the lake, but my elevation was such that I could discern its surface from the north to the south, a distance which I estimated at sixty or eighty miles. The shore next to me, as far as I could see it, was white. Numerous mountainous islands, dark and apparently barren, sometimes in ranges of fifteen or twenty miles, sometimes in solitary peaks, rise to a considerable elevation above its surface; but the waters surrounding these insulations could be traced between them as far as the eye could reach. The evening was calm, and not a ripple disturbed the tranquil bosom of the lake. As the sun was sinking behind the far distant elevations to the west, the glassy surface of this vast inland ocean was illuminated by its red rays, and for a few minutes it appeared like a sea of molten fire. The plain or valley of the lake, to the right, is some eight or ten miles in width, and fertile. The Weber river winds through it, emptying into the lake some ten miles to the north of our camp. A few trees fringe its margin. I could smell a strong and offensive fetor wafted from the shore of the lake.