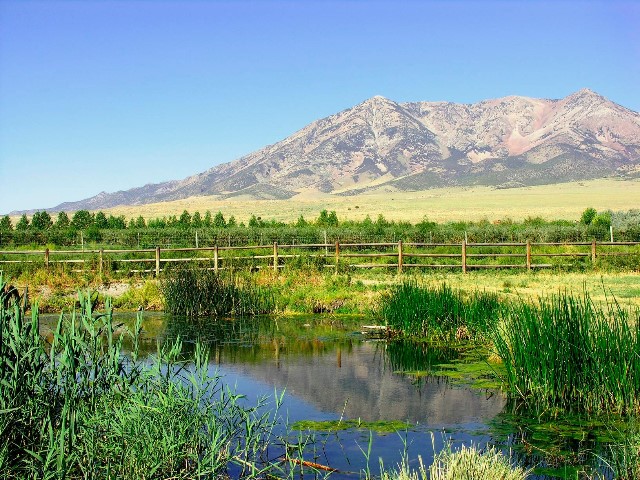 The spring Bryant dubbed "Buchanon's Well" would later become known as Donner Spring. Pilot Peak, where the mountain fires were seen, is in the background.

We left, to us, in our tired condition, the seemingly interminable plain of salt, and entered upon the sagey slope of the mountain about 10 o'clock. Hallooing as loudly as we could raise our voices, we obtained, by a response, the direction of our party who had preceded us, and after some difficulty in making our way through the sage, grass, and willows, (the last a certain indication of water in the desert,) we came to where they had discovered a faint stream of water, and made their camp. Men and mules, on their first arrival, as we learned, had madly rushed into the stream and drank together of its muddy waters, - made muddy by their own disturbance of its shallow channel and sluggish current. Delay of gratification frequently gives a temporary relief to the cravings of hunger. The same remark is applicable to thirst. Some hours previously I had felt the pangs of thirst with an acuteness almost amounting to an agony. Now, when I had reached the spot where I could gratify my desires in this respect, they were greatly diminished. My first care was to unsaddle my mule and lead it to the stream, and my next to take a survey of the position of our encampment. I then procured a cup of muddy water, and drank it off with a good relish. The fires before noticed were still blazing brightly above us on the side of the mountain, but those who had lighted them, had given no other signal of their proximity. The moon shone brilliantly, and Jacob, Buchanan, McClary, and myself, concluded we would trace the small stream of water until we could find the fountain spring. After considerable search among the reeds, willow, and luxuriant grass, we discovered a spring. Buchanan was so eager to obtain a draught of cold, pure water, that in dipping his cup for this purpose, the yielding weeds under him gave way, and he sank into the basin, from which he was drawn out after a good “ducking,” by one of those present. The next morning this basin was sounded to the depth of thirty five feet, and no bottom found. We named this spring “Buchanan's well.”