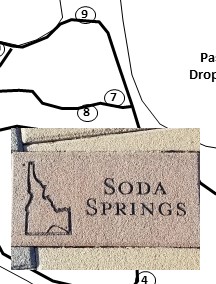 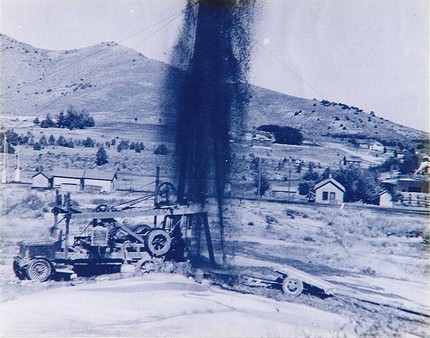 Drilling for hot water in 1937 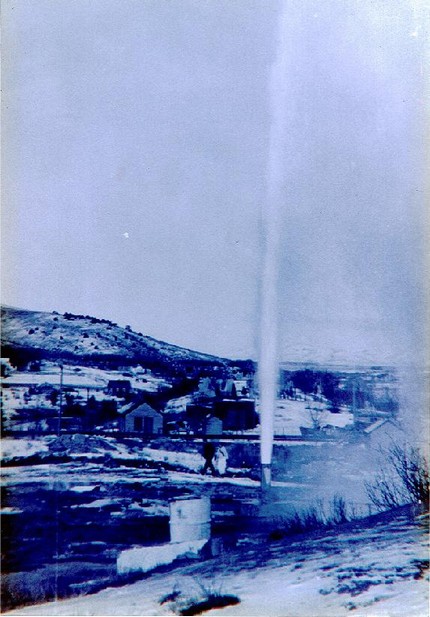 Geyser before capping in 1937

Soda Springs, located along the Hudspeth cutoff, are naturally-occurring pools of heated, carbonated water caused by ancient volcanic activity. Pioneers sometimes referred to them as “Beer Springs”. Emigrants frequently took advantage of the hot water for clothes washing, bathing, and medicinal purposes, often commenting on the picturesque scenery and odors of the area in their diaries.

The development of the town of Soda Springs and the building of Alexander Reservoir has destroyed or covered many of these historic springs; however, Steamboat Spring, Wagon Box Grave, Hooper Spring, Octagon Spring, and two short traces of ruts can still be seen in the area. In Hooper Springs Park, visitors can sample the carbonated water just as westward-bound travelers did some 160 years ago.

Soda Springs is also the home of the world’s largest man-made geyser. The geyser was created in 1937 when engineers were attempting to find a hot water source for a swimming pool. On November 30, 1937, the drill went down 315 feet and unleashed the geyser. The extreme pressure, caused by carbon dioxide gas mixing with water in an underground chamber, caused water to shoot 100 feet into the sky. It is now capped and controlled by a timer and erupts every hour on the hour. It is the only captive geyser in the world.

Another interesting site is the Wagon Box Grave in Fairview Cemetery. In the summer of 1861 a family of seven on their way to Oregon was camped in the vicinity of Soda Creek and the Bear River. Their horses had strayed and the family fell behind the main part of the wagon train to search for them. Sometime during the night they were killed by Indians. The bodies were found the next morning by members of the larger party. One man, George Goodheart, related their burial as follows: “We then covered them all up with quilts, and took the upper sideboards and sawed them so they would fit across the wagon box. We put some across over the old Folks’ faces and some over the children’s faces at the foot. Then we got some willows from Soda Creek and cut them so as to cover the whole length of the wagon box. We then spread quilts over them, covered them with dirt, and set four formation rocks, one at each corner.”

This information is based on an article by Kathy Weiser-Alexander at legendsofamerica.com