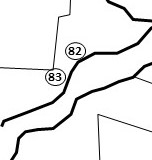 I noticed to the left, on the declivity of the mountain, a small patch of ground displaying a pale yellowish vegetation. A phenomenon so singular amidst the brown sterility of mountain and valley, excited my curiosity, and I thought it not impossible that we might find there a small quantity of water. Calling Miller, I requested him to ride up to the spot and ascertain what the yellowish growth might be. He was quickly at the place designated, and very soon afterwards, taking off his cap, swung it round and round, nearly overjoyed at the discovery. he had made, which we all immediately knew to be a spring. Had he discovered a mine of solid gold, or a ton of diamonds, it would, in our thirsty condition, have produced no other sensations than those of extreme disappointment. Water was what we craved, and a universe of glittering wealth would not have weighed in the balance of our desires against it. Turning short to the left, I rode up the slope to where Miller was still standing. Before I reached him, I could perceive a sensible moderation in his joyous manifestations. I asked him if he had found water? He answered that he had, but that his mule, in attempting to drink out of a hole, had nearly scalded its tongue off. I could see that the mule was suffering considerable pain from the effects of the boiling hot water which, incautiously, it had attempted to drink. Passing a little further along, I found myself in the midst of a hundred or more holes or small basins, varying from two to ten feet in diameter, of boiling water. Searching about, I found in a ravine a small basin of water, that oozed sluggishly through a stratum of earth, which, although quite warm, was not burning hot. I drank copiously of this water, and the other members of our party, and our mules, coming up, one after another, drank likewise. But as soon as the stock in the basin was exhausted, the new supply that flowed in became too hot for use. We encamped here, after a ride of twelve hours, tying our mules closely to the wild sage-bushes, to prevent them from falling into the boiling holes by which they were surrounded. These springs are a great curiosity, on account of their variety and the singularity of their action and deposites. The deposite from one had formed a hollow pyramid of reddish clay, about eight feet in height, and six feet in diameter at the base, tapering to a point. There were several air-holes near the top, and inside of it the waters were rumbling, and the steam puffing through the air-holes with great violence. Miller threw stones at the cap of this pyramid. It broke like brittle pottery, and the red and turbid waters ran down the sides of the frail structure which they had erected. Not far from this was a small basin, and a lively but diminutive stream running from it, of water as white as milk, which, indeed, it greatly resembled. I cooled some of it in my cup, and drinking, found it not unpalatable. It was impregnated with magnesia. In another basin, the water was thickened, almost to the consistence of slack mortar, with a blue clay. It was rolling and tumbling about with activity, and volumes of steam, accompanied with loud puffing reports, ascended from it. The water of the largest basin (about ten feet in diameter) was limpid, and impregnated with salt and sulphur. From this basin, when we encamped, a small stream ran down the slope. The rock surrounding these springs is a mere shell or crust, formed, doubtless, by a deposite from the overflowing waters from the basins or holes, which are so many ventilators for the escape of the steam from the heated and boiling mass of liquid beneath. We made a dam across the stream flowing from the large basin, some distance below it, by raking together the slight covering of earth upon the rocks. We thus collected a considerable body of water, which, cooling, was more palatable to ourselves and our mules than any which we had before obtained. This dam was enlarged before we retired for the night, in order that we might have an abundant supply of cool water, brackish and bitter though it was, in the morning. As we moved about our camp after dark, we were in constant danger of falling into the scalding and bottomless basins or holes by which we were surrounded. Fortunately no accident occurred. The ground under our blankets was quite warm, from the effects of the heated matter rolling, bubbling, and puffing in the bowels of the earth.