Begin at the east end of the plaza next to the parking lot. Tap a number on the map to see information about that item. You can use your fingers to stretch the map to zoom in. 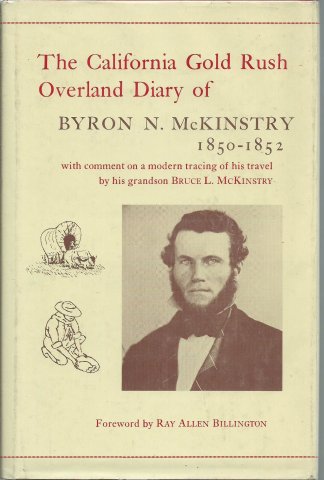 Born on August 20, 1818 in Hyde Park, Vermont, McKinstry was the eldest of nine children. Byron left Vermont with his father (George) in 1837 to avoid a lawsuit dispute over land his father owned. They later parted company in Illinois and Byron set out on his own to claim property in the newly opened Iowa Territory. Finding it difficult to secure gainful employment there, he moved on to Illinois, Missouri and even returned to Vermont, working a variety of jobs until 1850. He married Harriet Hester Ann Smith in 1848. They left Vermont and went back to Illinois (just northwest of Chicago) to begin their life together. Byron caught Gold Fever in early 1850 and joined up with a group headed to California. In his March 18th diary entry he wrote "Left home, Ringwood Prairie, McHenry, McHenry Co. Ill. for California, in company with Joseph B. Tuttle, H. S. Blackman and Jedediah Hebard. We started from Tuttle's at about 11 o'clock A.M., the weather cold, ground frozen a little, and about an inch of snow on it."

The company traveled south down the Mississippi River and across Missouri, reaching Council Bluffs on May 17. They followed the typical emigrant route along the Platte River, choosing to travel on the north side, which at that time was less used. They reached South Pass in early July.

First Site
You must have an internet or cellular connection to use Google Maps.
Travel Mode: