Known as the Donner-Reid Party, when they started out they numbered 87. The oldest: George Donner, age 62. The six youngest - nursing infants. They journeyed twenty-five hundred miles in seven months but the company, like the wagons, has fallen to pieces. Minor irritations have festered into suspicions and accusations. Good will has given way to wrangling and threats. There’s been a banishment and a killing. Water refused to babies parched from thirst. An old man left behind to die. Curses and dissension have fueled a growing panic and now, with mountains still ahead and one hundred and fifty miles to go, it is snowing. 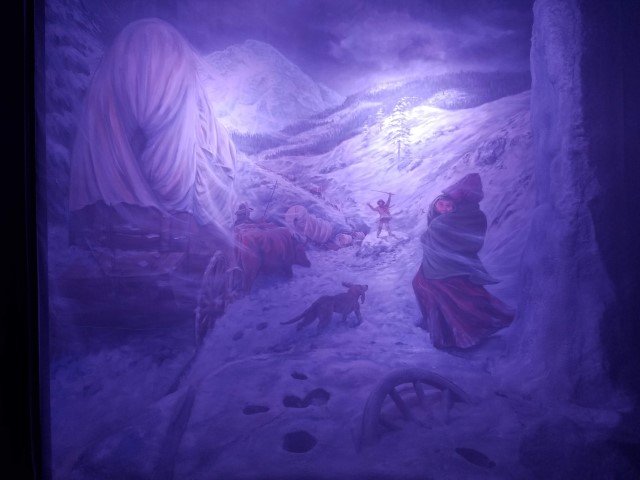 “The snow was then up to the mules’ sides, the farther we went up the deeper the snow got. So, the wagons could not go. So, they packed their oxens and started with us carrying a child a piece and driving the oxens in the snow up to their waist. We went on that way two miles and the mules kept falling down on the snow head foremost. We, the women, were all so tired.”

“We lost our road and owing to the depth of the snow on the mountains we’re compelled to abandon our wagons and pack our goods upon oxen. I foresaw the danger plainly and unmistakably. Terror had mounted to panic. The mules were lost. The cattle had strayed away, and our further progress rendered impossible.”

“The snow came on with blinding fury.”

“In a few days the snow was four feet deep.” 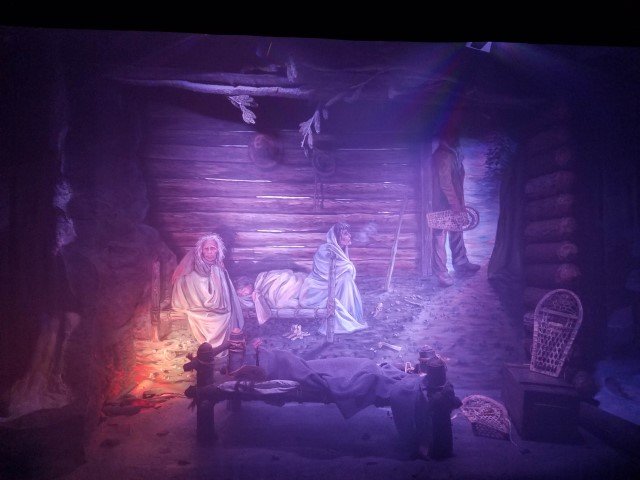 “We returned to the lake and prepared as best we could for the winter.”

“Each family built some kind of house and killed all the cattle as they could not live since the ground was covered with snow.”

“It was the first of November, I think, that we went into that camp of snow and suffering.”

Eighty-one had made it this far: twenty-five men, fifteen women, and forty-one children. They constructed three windowless cabins with pine logs, a lean-to, and a number of crude tents. Living conditions started out miserable and steadily grew worse. In time, all that was left to eat were ox hides, boiled for hours into a glue-like jelly, bones, and wood mice if they could catch any. When there was nothing else, they ate their pet dogs. The Reed’s little dog Cash was last, and the family lived on him for a week.

Patrick Breen was the only member of the party to keep a day to day journal. By January, the endless snowstorms ceased to be the main topic.

Monday, 21st. Sad news. Jake Reinhart and Smith are dead. The rest of them in a low situation. Snowed all night.

Friday, 12th. A warm thawey morning. We hope with the assistance of Almighty God to be able to live to see the bare surface of the Earth once more.”

In mid-December, fifteen of the strongest had left on snowshoes. It was a grueling march where they endured snow squalls, hallucinations, bloody, frozen feet and starvation. After four days of no food, when five people had died, they began eating human flesh. It was agreed no one would have to eat any of their relatives.

January 18, 1847, thirty-four days from the day they left the cabins, the last of the snowshoers reached a settlement. Only seven of the fifteen had survived. 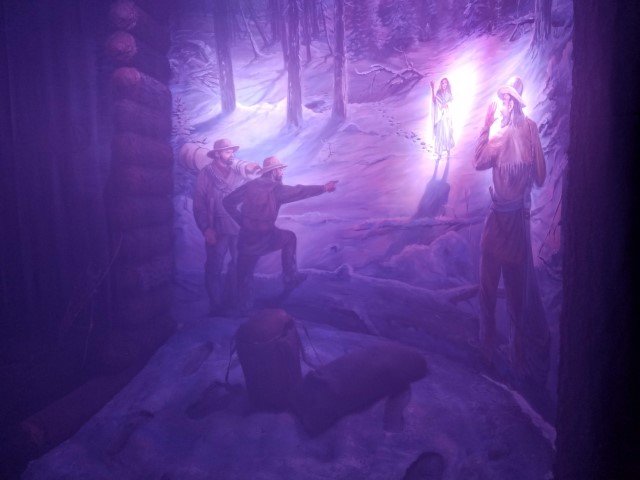 “Hellooooooooooo. Anyone out there? Hello?” (Search party yelling and hoping for response.)

“We crossed Truckee Lake on the ice and came to the spot where we had been told we should find the emigrants. We looked all around but no living thing except ourselves was in sight and we thought that all must have perished. We raised a loud ‘helloooooo’ and then we saw a woman emerge from a hole in the snow. As we approached her several others made their appearance in a like manner, coming out of the snow. They looked gaunt with famine and I never can forget the horrible, ghastly sight they presented. The first woman spoke in a hollow voice, very much agitated: ‘Are you men from California or do you come from heaven?’

“The snow was about twelve to fourteen feet deep and covered everything. They were an awful looking sight. A white and starved looking group, I can tell you. They were pretty glad to see us. They took on off. We’ll take as many of the little ones as we can carry. Such pain and misery. These children are almost gone. Men, women and children cried and prayed. After we was there a bit, they told us how they had suffered for months. Food all gone and death taking them on all sides. We took twenty-one of them. Mostly women and children. The strong ones were chose as we couldn’t get the weak ones across. They were bound to die so we left them. It was pitiful to hear them crying for us. We had to go, it was sure death to stay there.”

It took four relief parties of settlers and mountaineers to bring the emaciated survivors off the mountain. Some died while waiting or along the way. The second relief party was organized by James Reed, who had been banished from the party after killing John Snyder in a fight. William McCutchen, a member of the Donner Party who had left earlier to get help, returned with the second relief. During the three-day blizzard, as he worked to keep the fire lit, he was so chilled he didn’t notice the fire burn through all four of his shirts until the skin of his back was scorched.

By that second rescue, some of the starving people who remained were subsisting on the flesh of those who had died. The rescuers themselves nearly died from their heroic efforts, hauling sixty-pound packs over mountains where the snow was as deep as twenty-five feet. They were trapped in howling storms and somehow found the strength to carry survivors who could not walk.

The last rescue was completed in April 1847, eleven months after the Donner Party began their overland journey, and five months after they were stranded in the mountains.

Of the 87 members of the Donner Party, 39 died and 48 survived. As spring returned to the Sierra Nevada those who had made it began their new lives as Californians. In the shadow of the mountains they married, remarried, had children, worked and prospered and many lived to an old age.