If you are pressed for time, or just want to revisit the content, this page allows you to view the text and images available on the interpretive signs at the entrance gate kiosk.

You are at the entrance to The National California Emigrant Trail Interpretive Center. The purpose of the center is to gather and display historical knowledge about the emigrants who made the trek to California in the 1840s, 1850s, and 1860s. Interpretive exhibits and presentations inside will help you learn more about one of the largest migrations of people in American history.

The long journey on foot or in wagons traversed more than half of the distance across the United States. Emigrants crossed the Great Plains, the Rocky Mountains, the Great Basin, and the Sierra Nevada mountains to reach their promised land. There is a good possibility that you are standing on land that at one time showed ruts of the trail, for each year it moved a little to the north or south to avoid the dusty trail of the previous year.

The early history of the Humboldt River valley is about much more than the California Trail. It is also about the native Indian tribes who lived along the river. These groups, mainly Western Shoshone and Paiute, together with earlier hunter-gatherer people, lived in the area at least 8,000 years before the wagon trains - the native people called them "dust snakes" - came this way and changed these ancient cultures forever. The California Emigrant Trail Interpretive Center also features displays about this important part of Native American history. 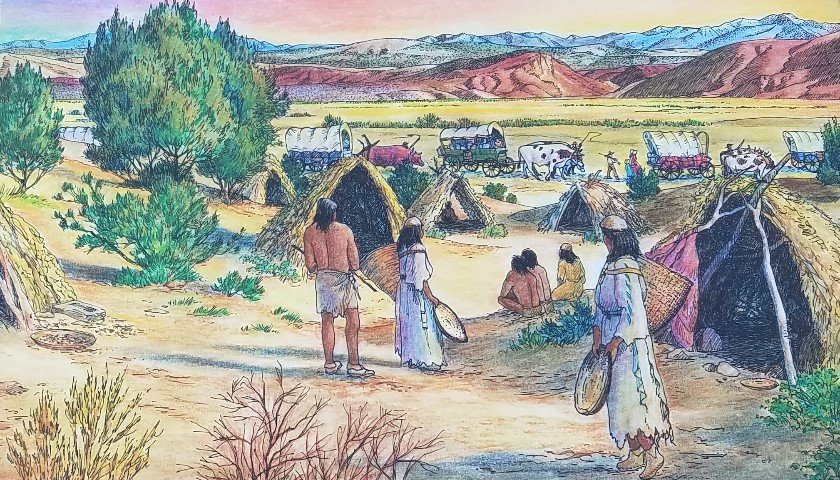 "They [the emigrants] came like a lion, yes like a roaring lion, and have continued so ever since, and I have never forgot their first coming." - Sarah Winnemucca - Paiute

The California Emigrant Trail extended approximately 2,000 miles from the Missouri River to California. Today you are standing on a segment of the trail that followed the Humboldt River for about 280 miles across northern Nevada. It was the only water-course across the high desert of the Great Basin.

The Humboldt River begins at Humboldt Wells, springs near present-day Wells, Nevada, and flows west and southwest to the Humboldt Sink. It generally took 16 days for emigrants to make the journey along the river. Most travelers crossed Nevada in the heat of August, when the trail was very dusty, the river was nearly dry, and the water alkaline.

From 1849 to 1853, at the height of the California Gold Rush, approximately 200,000 emigrants passed by this location, with 50,000 more making the trek before the Transcontinental Railroad was completed in 1869.

When they had reached this point, the emigrants had been on the trail for three months, had traveled about 1,600 miles, and were 400 miles from their destination. Still ahead of them lay the crossing of the dreaded and waterless Forty-Mile Desert and the climb over the Sierra Nevada range. 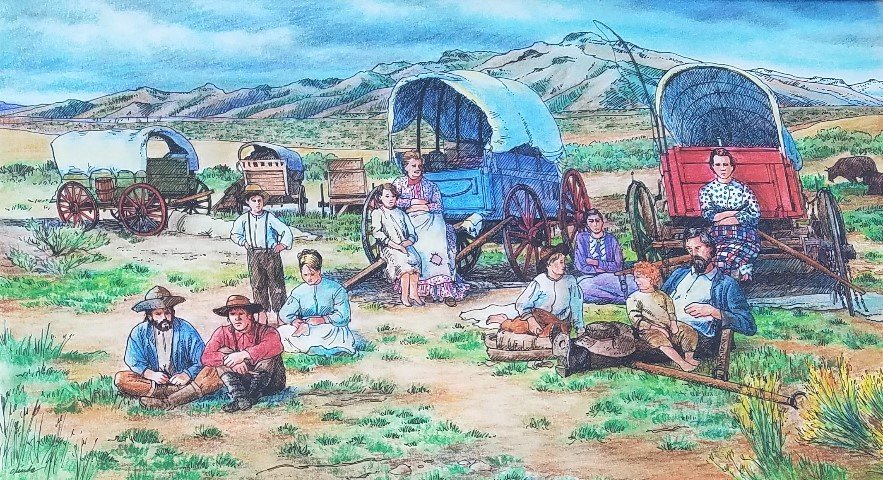 "Aug. 25. We hunted down the River 3 miles more and found but a very scanty picking for the oxen. Everybody hungry and out of humor as usual. From what I can hear and I speak to almost every company I see, I don't think there is ever a body of men left the states, on any expedition, that had some much quarrelling and fighting, (the strong abusing the weak) as the California expedition of 1849." - James F. Wilkins, 1849

Across the valley you can see the canyon of the South Fork River, a major tributary to the Humboldt River. This portal is also the western end of the infamous Hastings Cutoff, which rejoined the main California Trail not far from the California Trail Center.

Lansford W. Hastings was an early entrepreneur who thought he had found a shorter route to California, claiming that his "cutoff" would save emigrants 400 miles and several days of travel. He promoted his route with an Emigrant Guide. Although he had not actually traveled the route, he persuaded a number of 1846 emigrants to travel with him, leaving the established California Trail at Fort Bridger, Wyoming.

Hastings and his initial group ran into difficulties almost from the start. First, they had to find their way west through the punishing geographical maze of the Wasatch Mountains of Utah, and then endure 80 miles without water across the desert and salt flats west of the Great Salt Lake. This was followed by the high desert of eastern Nevada and a long detour around the Ruby Mountains. After these hardships, they had to travel through South Fork Canyon, making 14 crossings of the river before they could rejoin the California Trail.

The Donner-Reed party of 1846 had also been persuaded to follow Hastings. After much travail and loss of livestock, furniture, and wagons on the Salt Flats, they found upon rejoining the California Trail that they had actually added 125 miles to their journey. They had also spent three additional weeks of travel time. Just a few days short of reaching the Sierra Nevada pass that would eventually be named for their group, the Donner-Reed party was trapped by an early snowstorm and suffered tragic consequences through the winter of 1846-47. Their tragedy largely put an end to travel on the Hastings Cutoff.

Whichever direction your travels take you, you are going to have a similar experience to what the California-bound emigrants had. You are going to see the same country, except for the towns and ranch meadows. The big difference, though, is that you will be traveling at a much faster pace. From here, you can be in California in a few hours. For the emigrants, it was as much as a month's journey. As you drive and look at the country, think about those people who plodded along, day after day, through the thick alkali dust and sand - headed toward dreams of gold or a new life.

The California Trail had its beginnings at several points along the Missouri River and included several variant routes across the Great Basin and over the Sierra Nevada mountains into California. With the completion of the transcontinental railroad in 1869, most travelers made the journey by rail.

There are many California Trail sites like this one, spread across Nevada. They are marked on this map.

As you stop at these sites, you will learn more about what happened to these emigrants as they traveled across the Great Basin. Be sure to visit the California Trail Interpretive Center just west of Elko, Nevada.

California Trail ruts and swales wind across Northern Nevada some touched only by the forces of nature since they were made by emigrant wagon trains on their way west in the mid 1800s.

Many of these irreplaceable historic trail segments lie on public land. They are yours to visit but they belong to future generations. Markers like those you see in front of you have been installed to prevent accidental damage. By following the markers you can walk in the foot steps of the pioneers but take care, these trails can be damaged and lost forever. Tread lightly, walk on the trail and refrain from driving on it. With your help time can stand still.

For more information take a brochure and talk to the staff at the California Trail Center.

About two miles southwest of this marker, the Greenhorn Cutoff ascended and wound through the hills for about twelve miles to avoid the river crossings in Carlin Canyon.