In the Great Basin—the arid lands east of the Sierra Nevada and west of the Rocky Mountains—the Native population was never large. Yet this seemingly harsh land has supported Native peoples for more than 14,000 years. Basketry water jars—always kept close at hand—exemplify cultural knowledge and resourcefulness. In an environment where food sources were often found at great distances and travel was by foot, Great Basin Indians developed technologies that sustained their way of life well into the late 19th and early 20th centuries, when hydroelectric projects opened the desert to non-Native farming and settlement.

Fish Trap - Twined basketry fish traps were made and used to catch various sizes and species of fish in the rivers of the Great Basin.

Traps were usually staked in the water and baited to lure the fish. The example shown in this photo is from the Walker River Reservation in Nevada, dated at around 1920. It is in the collections of the Smithsonian Institution's National Museum of the American Indian.

Women used open-twined trays to winnow chaff from large seeds and nuts and to parch these materials with hot coals before grinding them for mushes or adding them to stews. They used finer, more closely woven trays to sift small seeds and flour after it was ground. Plant fibers such as willows (various species of Salix) and sumac (Rhus trilobata) were used to make the trays, as these materials were strong and easily manipulated when wet. Women carefully tended patches of these plants by cutting and burning them to encourage new growth of long, straight stems. The example shown in this photo is from the Klamath Reservation in Oregon, dated at 1920. It is in the collections of the Smithsonian Institution's National Museum of the American Indian.

Tap the picture below to view a YouTube video about Shoshone Basket Work. 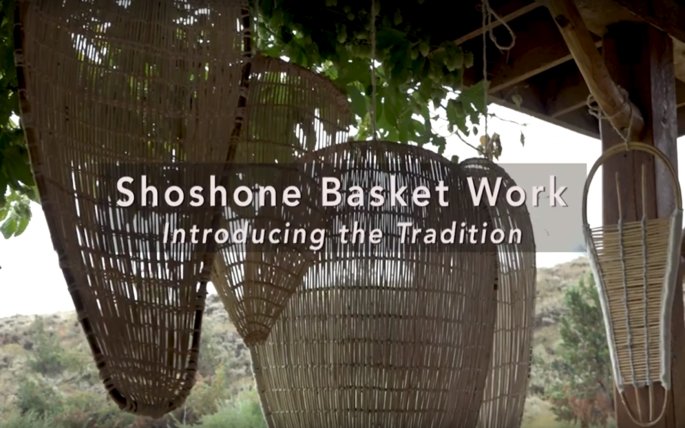