"We started on the 5th, ... The day was superbly fine, not a cloud to be seen, and mountains flashing their snowy tops in the sunlight. We passed around the elbow of the mountain range, ... and went directly north - bidding adieu, in passing, first to the warm springs, which had furnished the luxury of a bath, and then to the hot springs, whose ever-ascending vapor is such a remarkable addition to the scenery." - Cornelia Ferris, May 10, 1853, letter to friends. 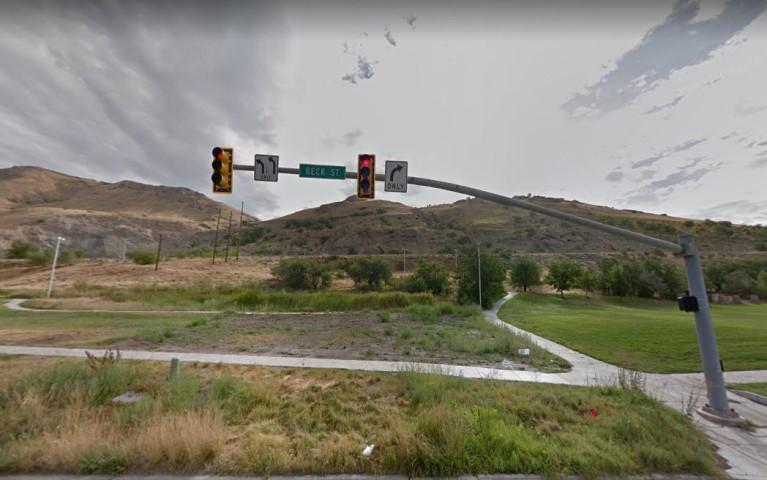 "Following the bluff closely, it [the Hensley Salt Lake Cutoff] intersects Gentile Street, ... from this point the old road is on the location of what is designated as the 'Old Bluff Road'...it will continue through lower Syracuse and Westpoint in a North-westerly direction until it reaches Muskrat Spring in East Hooper. A herdsman named John F. Stoddard, who worked for Captain Hooper, relates how often he could look to the East and see covered wagons making their way along the bluff hoping to camp that night at Muskrat Spring." - John M. Belnap, History of Hooper, Land of Beautiful Sunsets 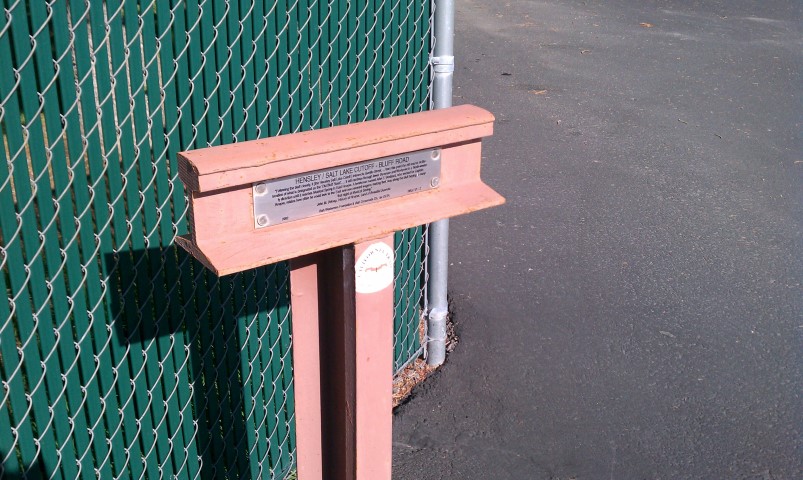 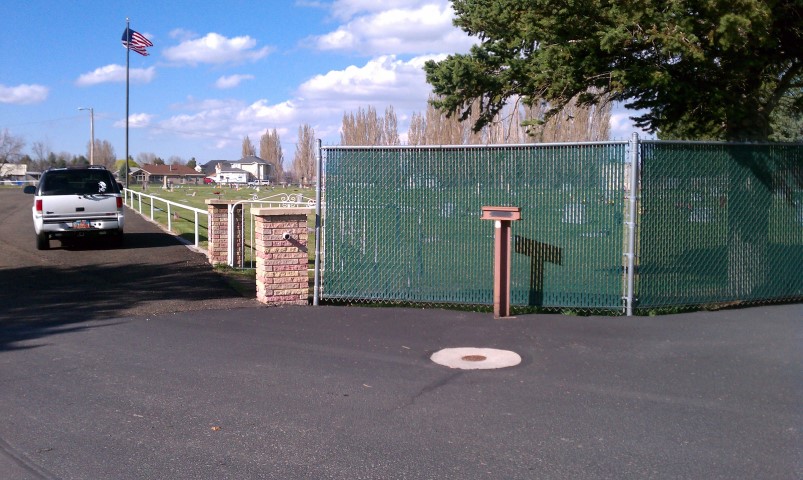 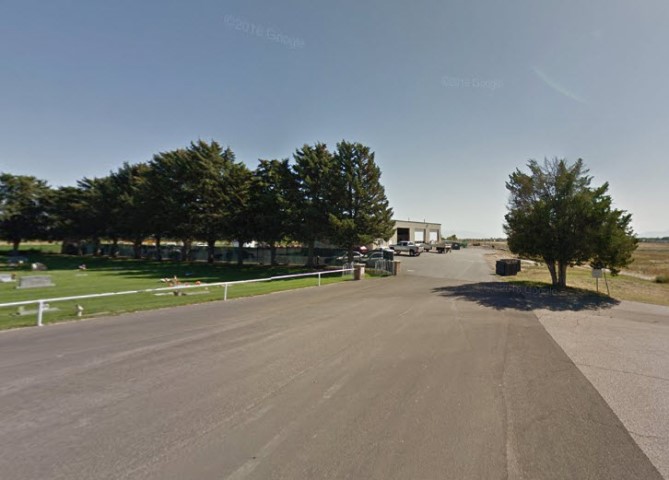 Looking past the south end of West Point City Cemetery. Marker HSLC UT-2 is just around the corner fence.

"Salt Lake, which is in sight today. it is beautifully clear and calm, the silvery clouds are resting upon all the mountain tops and circle around us, and the sky above is of a beautiful deep blue." - Lorena Hays, July 19, 1853

There is also a plaque on the other side of this marker.

"The only existing ruts on the Hensley / Salt Lake Cutoff between Salt Lake City and Trementon, are in the fields north of this marker. The easterly route went into Brownsville [Ogden] while the westerly Bluff Road, and center routes from Haights Farm in Kaysville, converged here then continued on to Muskrat Springs." - Historical 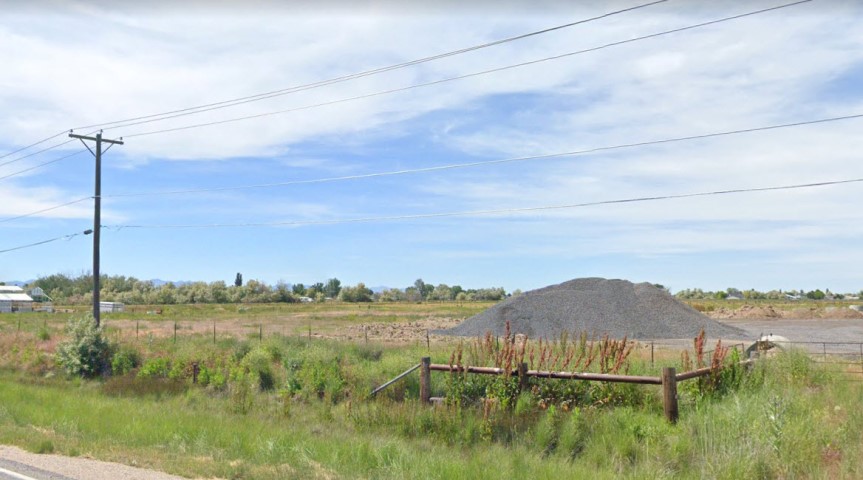 "Our route was about a north course, with mountains on our right, and salt lake on the left, distant from 2 to 8 miles, road for eight miles, heavy sand. Fifteen miles without water." - Isaac Foster, July 27, 1849 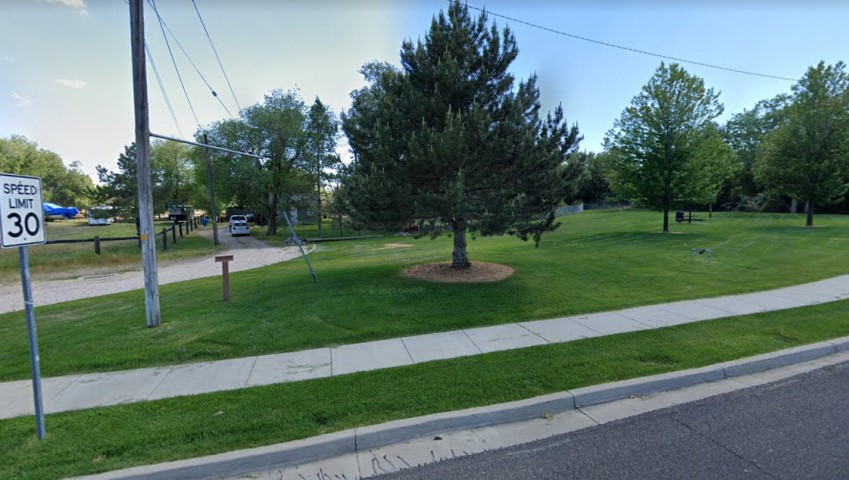 "Weber river five miles distant. Some of us left camp early to fish in that stream, but, like many a former effort to catch fish in these rapid running streams our enterprise was a failure. Weber river is quite a stream ... Good farms and many improvements line the way of our journey; ..." - John Hawkins Clark, July 23, 1852

Clark's journal was published in the Kansas Historical Quarterly and can be viewed on Hathitrust. 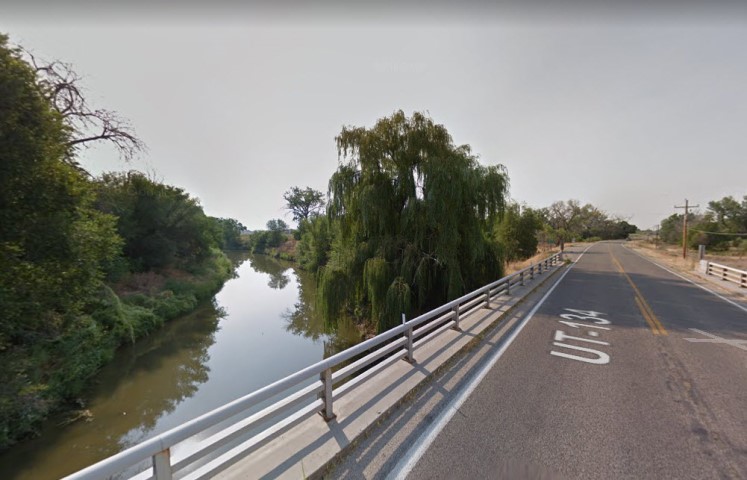 Looking south across the Weber River. Marker HSLC UT-4 is under the large tree to the left. 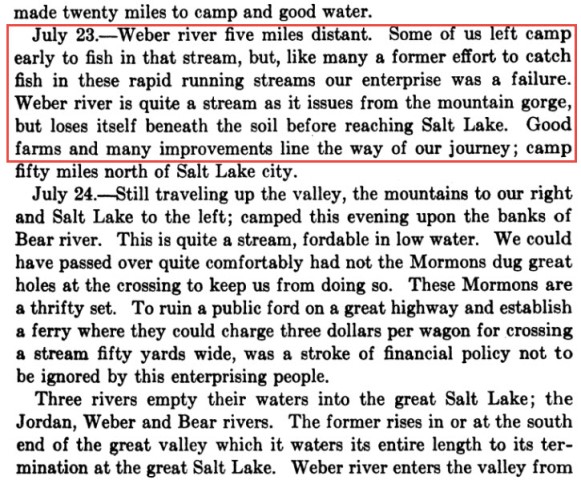 "Resumed our journey, our route still up the valley in a north course, and along the base of the mountains which rise to an immense height, while on our left the valley stretches away for miles to the lake, the margins of which are white with salt. Towards noon we passed several hot springs which were impregnated with salt and sulphur and bursting from the foot of the mountains in large streams, ..." - Calvin Taylor, August 16, 1850

Calvin's journal was published in the Fall 1970 Utah Historical Quarterly, Vol. 38, No. 4 and can be viewed and downloaded on Issuu. 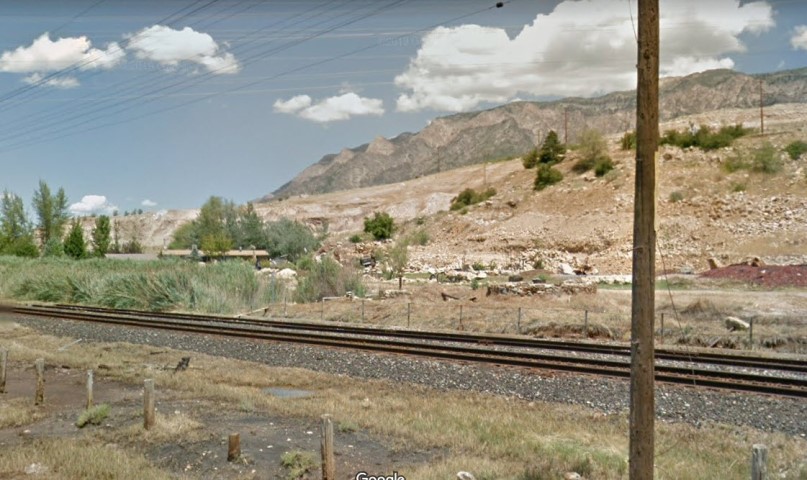 Looking northeast across the tracks toward Marker HSLC UT-5 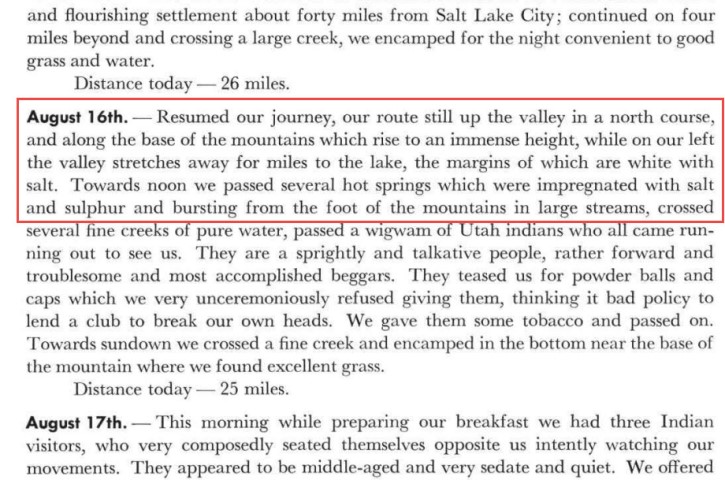 "This morning while preparing our breakfast we had three Indian visitors, ... They appeared to be middle-aged and very sedate and quiet. We offered them something to eat which they readily accepted. While they were eating we heard a distant yell and looking down the road saw an Indian riding at full speed toward us. He soon came up and dismounted. ... He was an active and sprightly Indian, very talkative, ... He carried a rifle and rode a very wild and spirited pony, ..." - Calvin Taylor, August 17, 1850 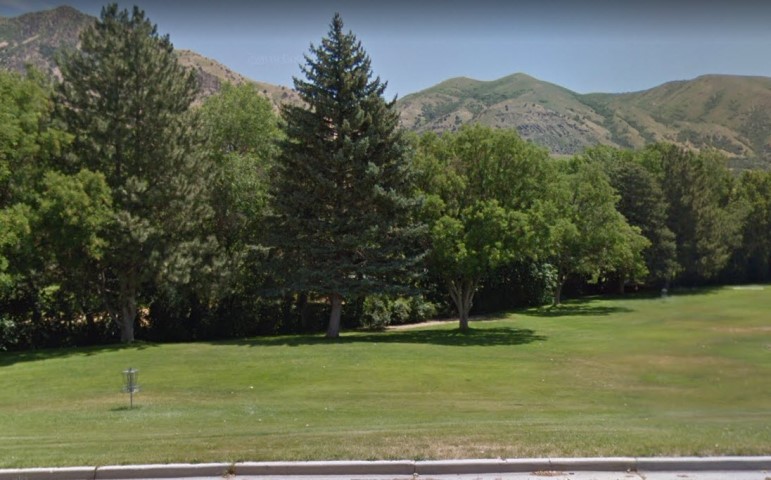 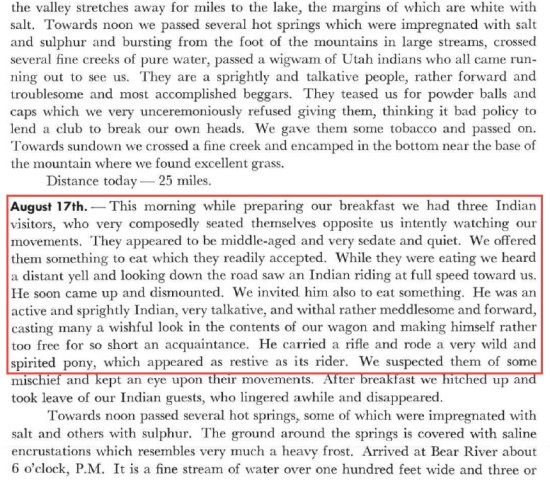 "This morning in crossing the Malad we broke down a wagon. The crossing was very bad. The stream was narrow, not very deep, but the bottom very soft and muddy. ... we came to Bear River, the fording of which was good. In consequence of breaking down we made but a short drive and camped on the east side of Bear River." - Henry Bigler, September 22, 1848

I couldn't locate the published form, but a typewritten copy of Bigler's diary is held in the collection of the University of Utah. The quote from that copy is similar to, but also quite different from the one on the marker. 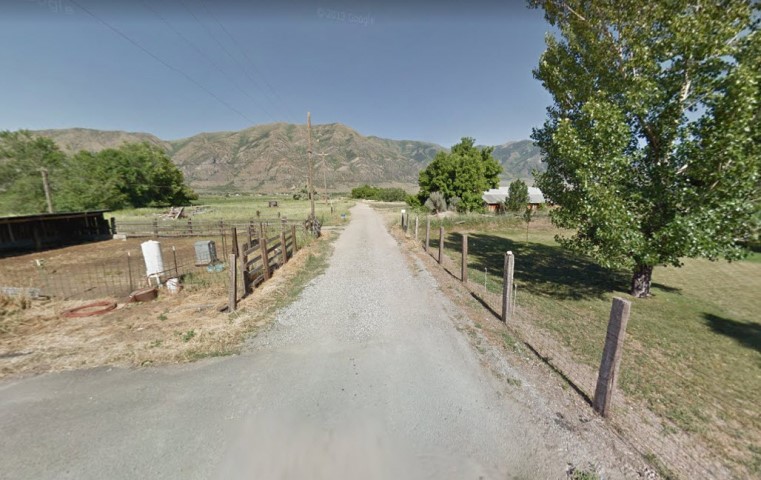 Looking east down the road leading to Marker HSLC UT-7 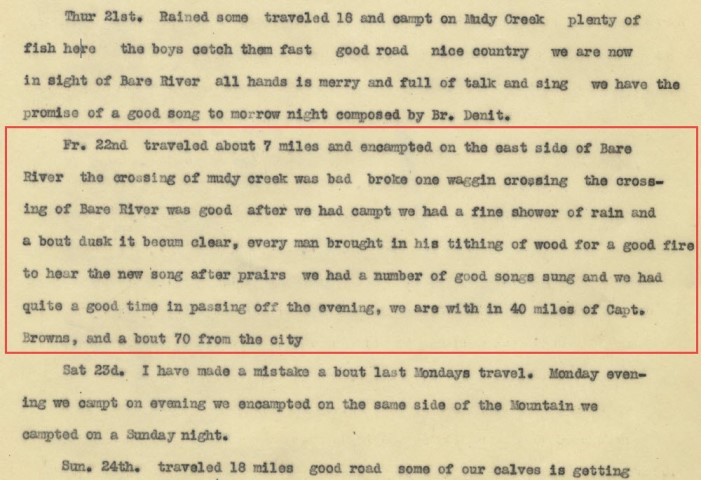 Excerpt from a typed version of Bigler's diary

"...we came to Bear River Crossing, ... There has been a ferry established here all summer until the last week, when the waters have become so much fallen that it renders it useless. The river now is about 150 ft. wide, an average depth of 2 1/2 feet. The waters are of a deep green, resembling sea water, but tastes fresh and sweet. The current is very swift and strong. ..." - Jesse Gould Hannon, August 19, 1849 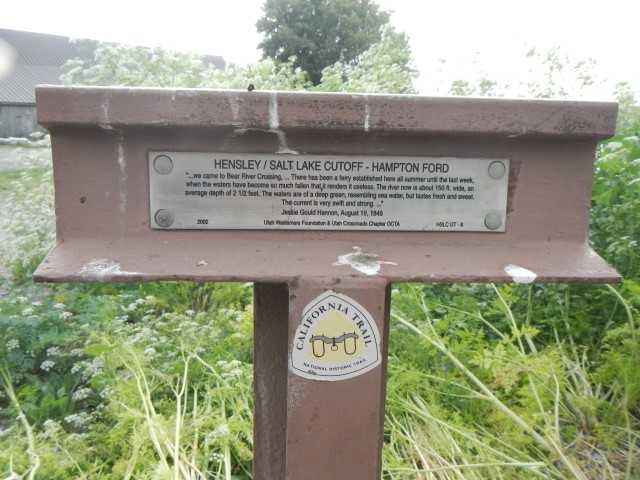 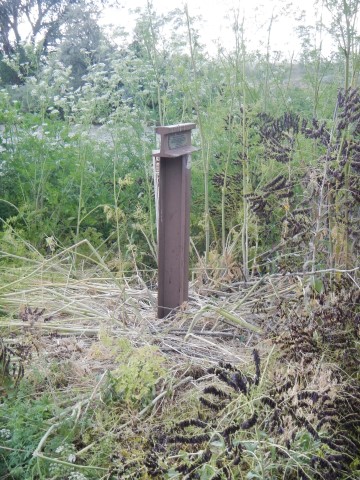 Another view of Marker HSLC UT-8 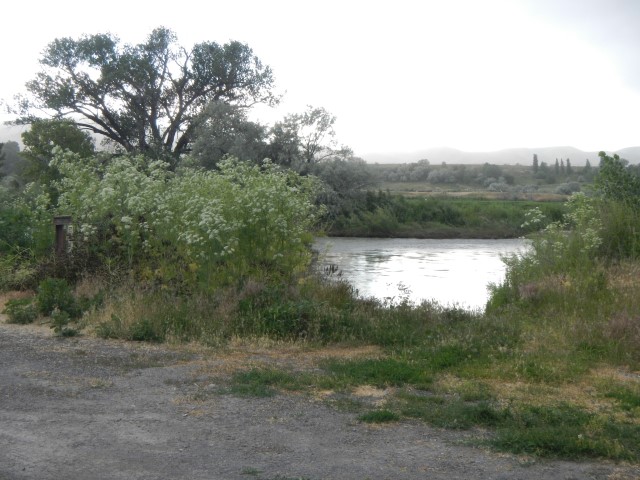 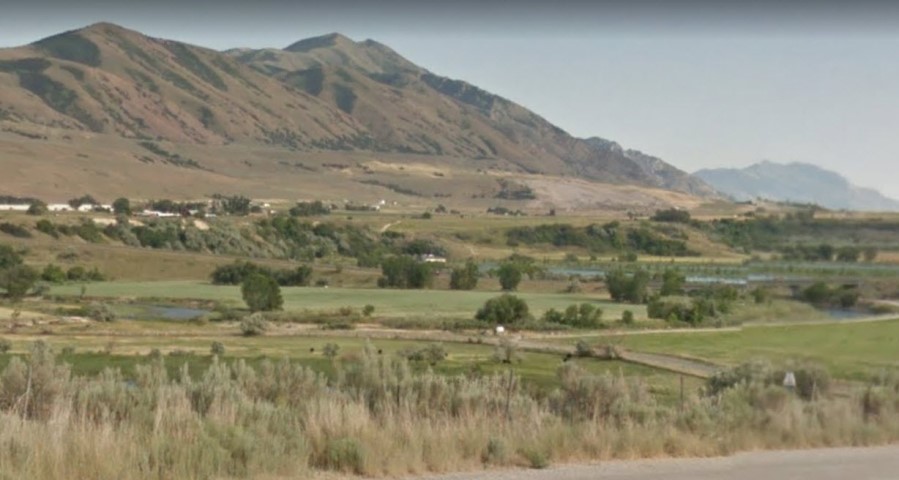 "After crossing the river, our course lay for several miles across a dusty plain to the south-west, and then over a bench of high land, which is the southern terminus of a chain of mountains that stretch far to the north. We then came down into a fine valley, two miles wide, and turning to the north-west, ..." - Franklin Langworthy, September 2, 1850

Franklin's book can be viewed for free on Google Books. 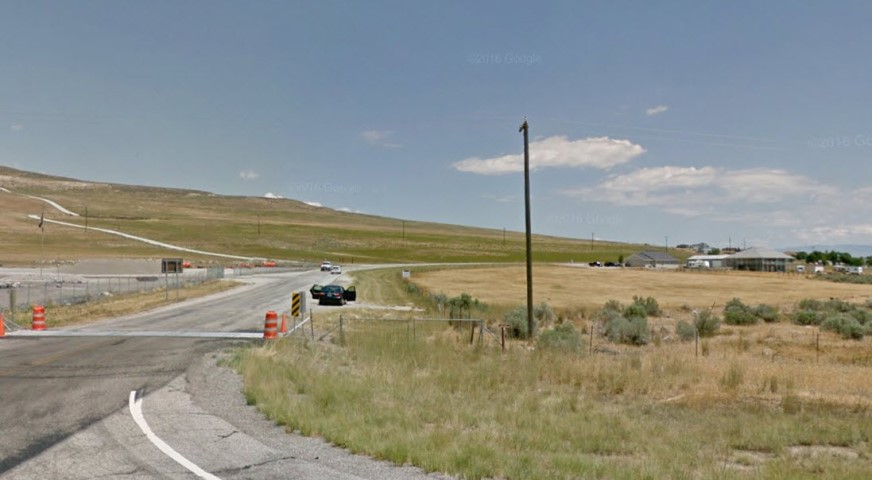 Looking northeast toward the uplands and Marker HSLC UT-9. 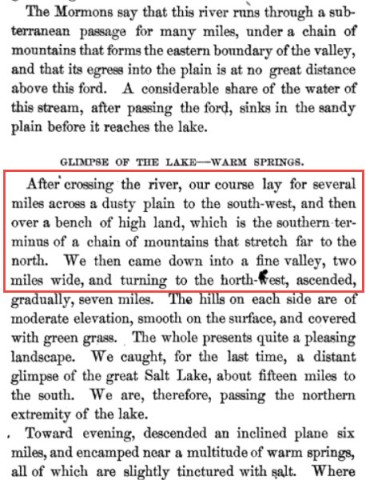 "... six miles further on came to warm and cold springs they come out of the ground near one another and join in one stream of good cold water the other warm we then had fourteen miles to go without water ..." - George Shepard, July 4, 1850 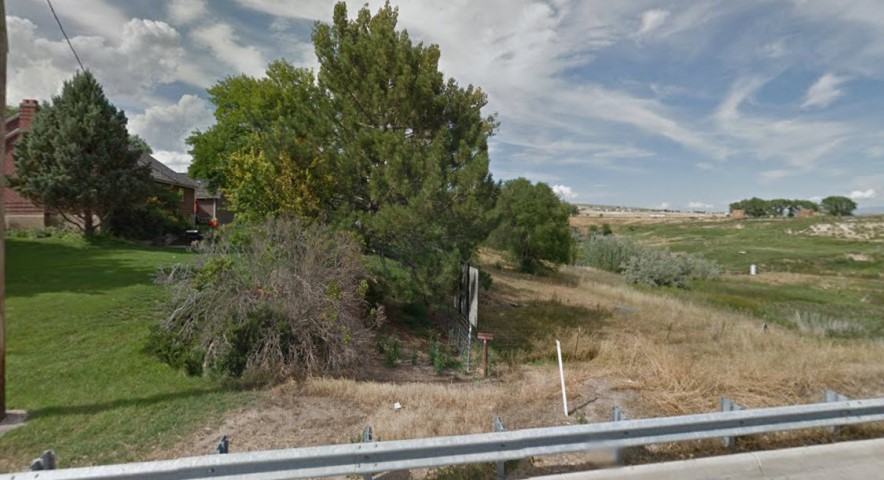 "We continued our route [to Salt Lake City] over an uneven country well grassed and but little sage brush. We camped at night in a valley where there were a number of warm springs, they came out and formed a large stream. The water has a brackish sulphery taste and smell, and was the only bad water we camped on between the sink of Mary's River and Salt Lake." - Addison Pratt, September 21, 1848 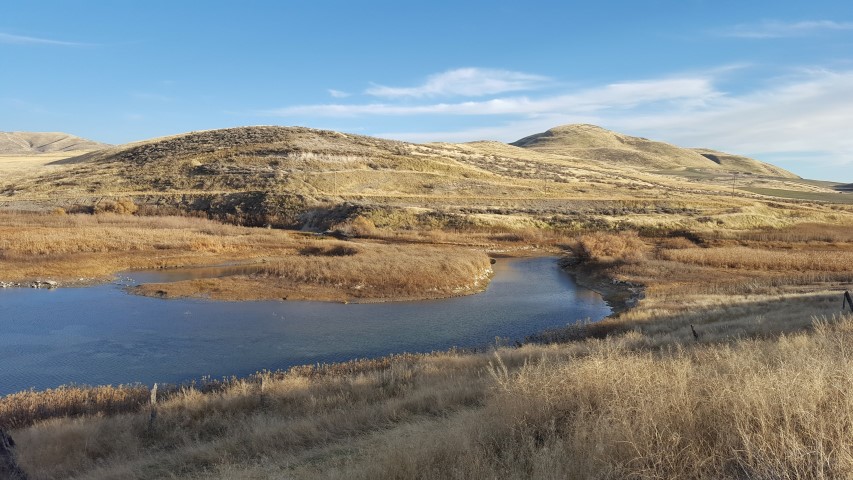 DILLY SPRING"... we traveled four hours over a mountainous country, and thank fortune we came to a spring in the mountains - cold pure water. This we considered a perfect God Send. Here we refreshed ourselves and animals for an hour, and moved on ..." - David Staples, August 21, 1849 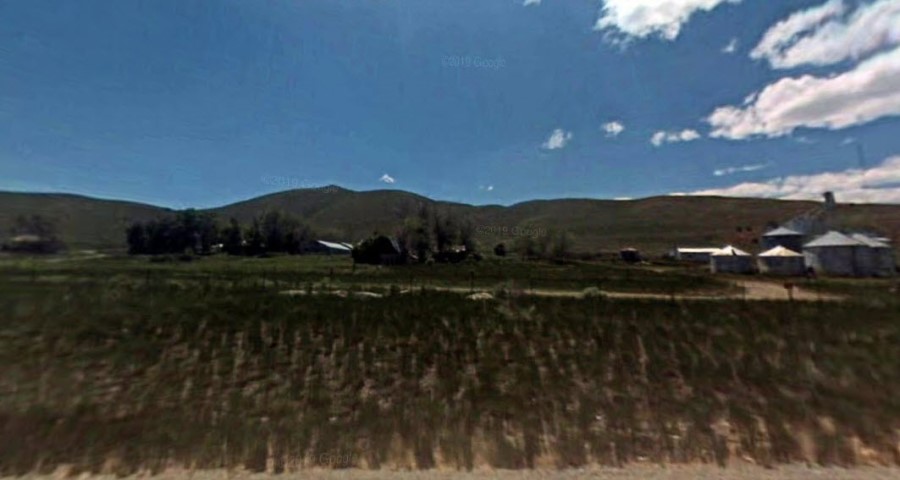 "Very bad grass here; Left as soon as we got breakfast. Came to Deep creek crossed and hunted for grass, and found none until we came to the sink of same creek, though we halted a few minutes in the dryest poorest grass in the world." - William Quesenbury, July 19, 1850 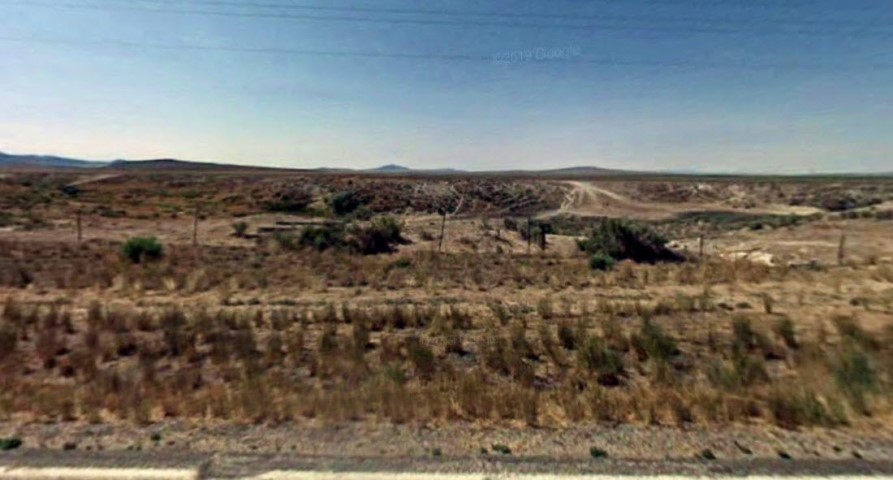 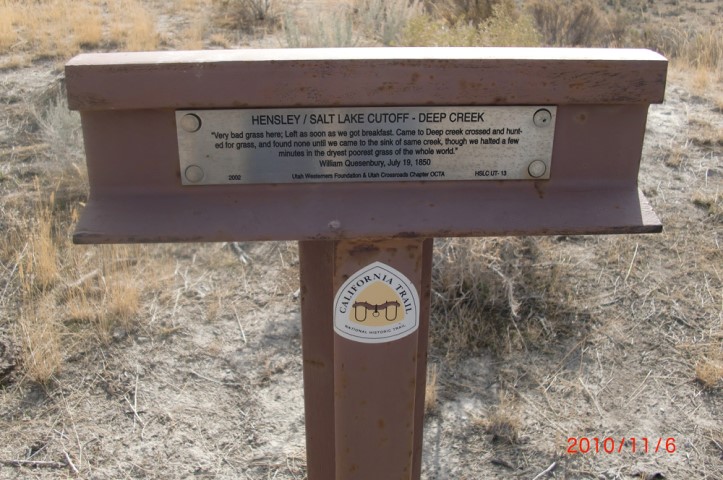 "Left Deep creek this morn, went on 10 miles & came to Pilot springs. There are 2 lone springs in a desert place. We saw 7 Indians on ponies. They wanted powder from us but we did not give them any. Went 2 miles to camp but found no water so had to go back to the springs & pitch for the night. It rained hard." - Lucena Parsons, April 19, 1851 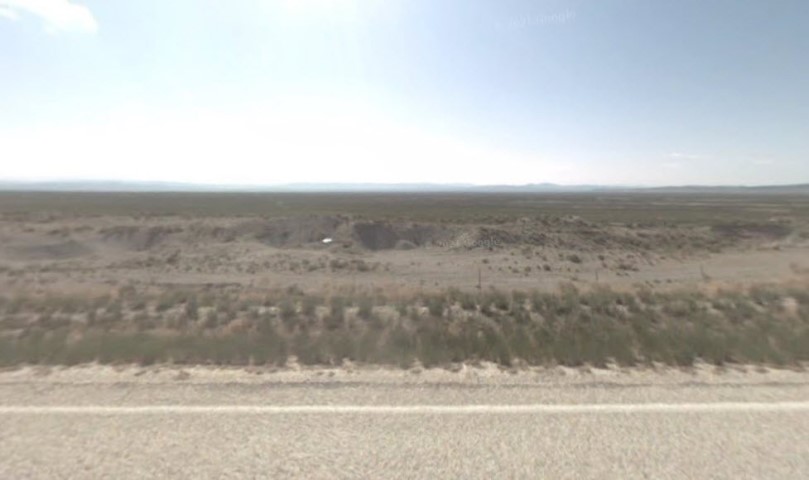 "Started and traveled till near eleven o'clock again, passing Pilot Springs, and some that were encamped there. Came to a wagon. I rode out and enquired for grass. We could see lights of the campers far up on the mountain sides [Emigrant Springs] - We reached them at length - " - William Quesenbury, July 19, 1850 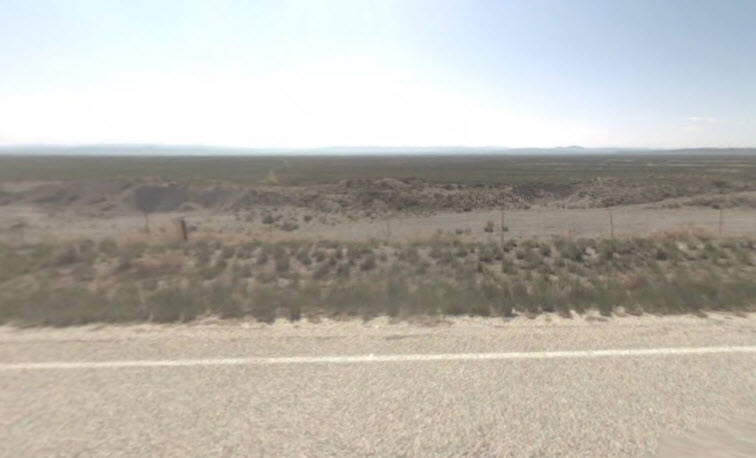 "We left this stream [Raft River] and followed a packtrail [traveling south east] that led through an ascending valley and camped towards evening on a mountain stream [Clear Creek] that ran down and sank near where we stopped. ... I concluded there must be trout in it higher up where there was a running stream. After camping... steered off towards the head of the stream and soon obtained a goodly string ..." - Addison Pratt, September 17, 1848 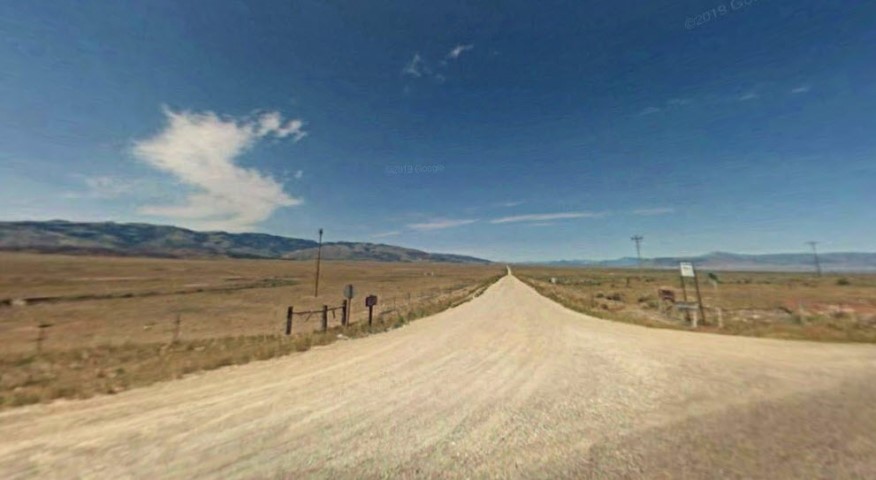 "Last night one of the guards lost a silver case from off a valubale silver watch belonging to Mr. E. Green. How that was done the guard could not tell and remains to this day a mystery! At this camp we left the Cash {Raft River], it turning and running north, while our course was east over and through sagebrush for ten or twelve miles" - Henry Bigler, September 17, 1848

"... in about 11 miles from our encampment we came to Casus Creek [Raft River] thence up the creek one mile by the side of a mountain of rotten stones [talus] road runs on the side of it for some ways [see trail on south side of the river] on nothing but small stones that slide down the hill. here we turned our horses across the crick into a large lot of wilde wheat high as a man's chin ... our party ascended a high mountain near by and planted a flag..." - George Shepard, July 7, 1850

"In a short time after leaving camp this morning, we reached the bench of a mountain up which our road led. The way was rough and steep. In about 5 miles we reached the junction of the old Fort Hall and Salt Lake Road. This is quite a picturesque place." - Calvin Taylor, August 22, 1850

"Set off this morning in good spirits. ... after making about eight miles we came to a chain of low mountains, and nearby on our left were two towering rocks near each other which Mr. A. Pratt named the Twin Sisters. ... Here we left the Fort Hall Road on our left taking a course directly east through sage brush and over rocks and boulders ..." - Henry Bigler, September 15, 1848