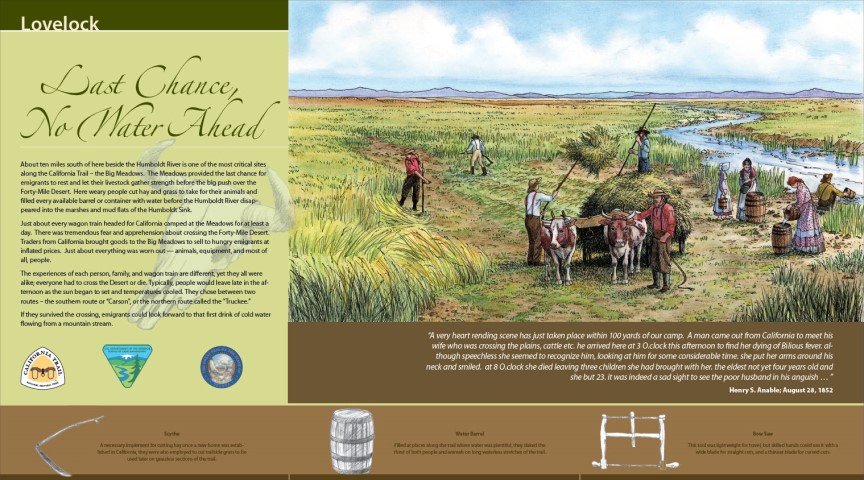 LAST CHANCE, NO WATER AHEAD

About ten miles south of here beside the Humboldt River is one of the most critical sites along the California Trail – the Big Meadows. The Meadows provided the last chance for emigrants to rest and let their livestock gather strength before the big push over the Forty-Mile Desert. Here weary people cut hay and grass to take for their animals and filled every available barrel or container with water before the Humboldt River disappeared into the marshes and mud flats of the Humboldt Sink.

Just about every wagon train headed for California camped at the Meadows for at least a day. There was tremendous fear and apprehension about crossing the Forty-Mile Desert. Traders from California brought goods to the Big Meadows to sell to hungry emigrants at inflated prices. Just about everything was worn out — animals, equipment, and most of all, people.

The experiences of each person, family, and wagon train are different, yet they all were alike; everyone had to cross the Desert or die. Typically, people would leave late in the afternoon as the sun began to set and temperatures cooled. They chose between two routes – the southern route or “Carson”, or the northern route called the “Truckee.”

If they survived the crossing, emigrants could look forward to that first drink of cold water owing from a mountain stream. 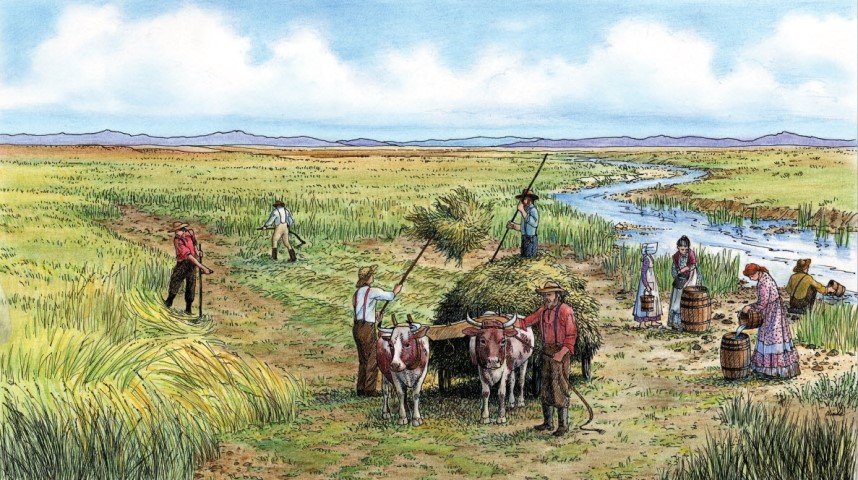 “A very heart rending scene has just taken place within 100 yards of our camp. A man came out from California to meet his wife who was crossing the plains, cattle etc. he arrived here at 3 O.clock this afternoon to find her dying of Bilious fever. although speechless she seemed to recognize him, looking at him for some considerable time. she put her arms around his neck and smiled. at 8 O.clock she died leaving three children she had brought with her. the eldest not yet four years old and she but 23. it was indeed a sad sight to see the poor husband in his anguish … ” - Henry S. Anable, August 28, 1852