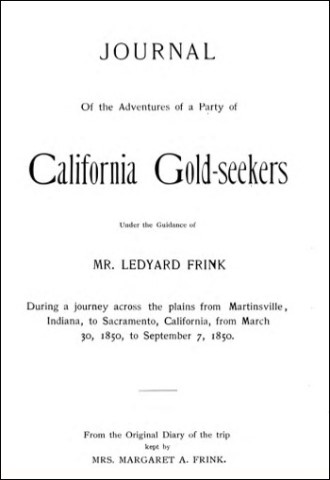 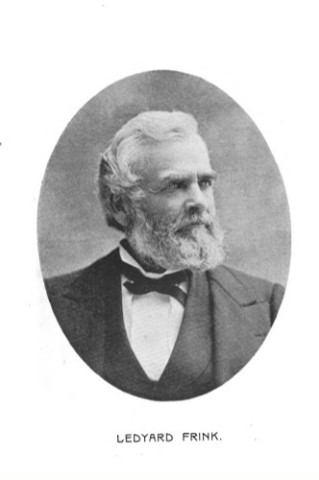 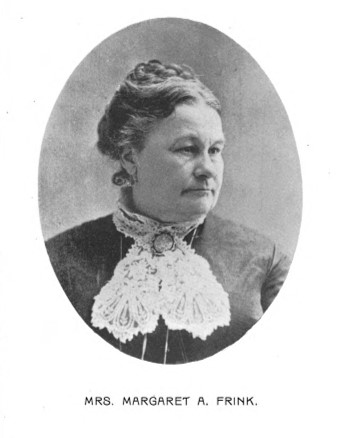 Ledyard Frink, from New York, and Margaret Alsip, from Maryland, met and married in Kentucky in 1839. Settling then in Ohio and later in Martinsville, Indiana, they were merchants, but with news of gold and adventure in California, they decided to head west in the spring of 1850. They built a wagon with a false floor so materials could be stored under it and a sleeping mattress could lay on top. As an investment, they purchased lumber sufficient for a small cottage at the cheaper rate of $3.00 per thousand and had it shipped around Cape Horn to avoid paying the $400.00 per thousand rate in California. They left Martinsville on March 30, 1850 with a wagon, 5 horses, and two mules. In addition to Mr. and Mrs. Frink, they had two young men accompanying them, an eleven-year-old boy (Robert Parker) they had informally adopted and the young adult son (Aaron Rose) of a neighbor. They added an additional member of the group (Mr. Avery) and an additional wagon with two horses in St. Joseph, MO.

Margaret was approximately 30-years old when she and Ledyard made the journey to California. Her diary can be viewed at Hathitrust Digital Library. It is also reprinted and available in the CTIC giftshop in the Covered Wagon Women series of books (Volume 2, or "Best of" Volume 1)