The Nevada City Road (along with the Truckee River Route) is described in a Trails West guidebook which may be available for purchase in the CTIC gift shop or you can purchase it directly from Trails West on their website.

"One mile from where you come into the valey you come to the forks of the road one goes down [to] Steep Hollow to the left and the other by Navada City when you take the right ... that is when you take the new road" - Micajah Littleton, October 2, 1850

Micajah's partial diary (but not including this section of the Trail) can be downloaded from the OCTA website.

The T-51 Marker is located on the reverse side of this marker.

Go to the Truckee River (to Johnson's Ranch) tour

"Climbing the steep mountain road [from Bear Valley] to the summit, we struck off in a westerly course, along a heavily timbered ridge" - John Steele, September 21, 1850

John's diary can be viewed on Hathitrust. 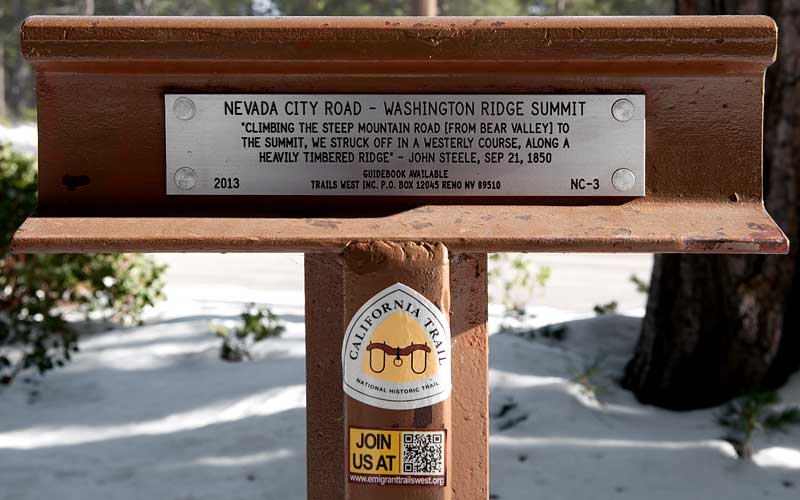 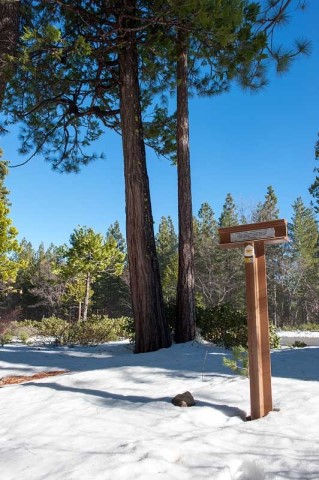 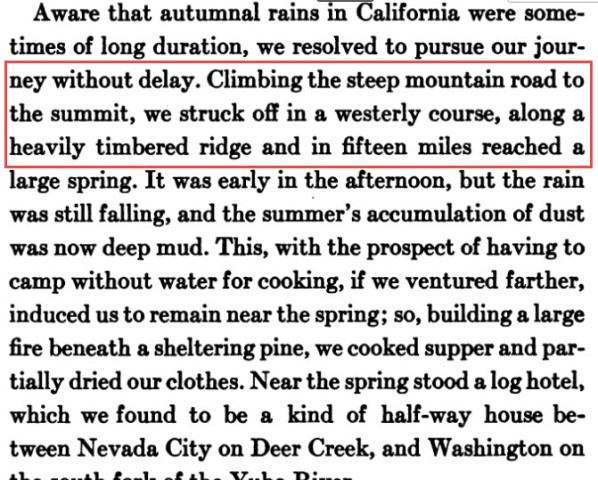 "Traveled 16 miles of pretty good road except [from] Bear Valey. Hilly which was very steep. Camped in the mountain opposite Washington [diggings] on the Yuba River. No feed or water, but plenty of timber." - John R. Shinn, September 30, 1850 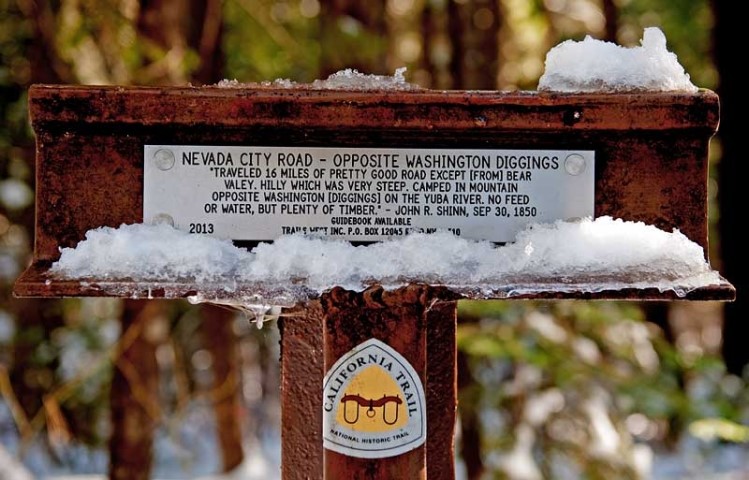 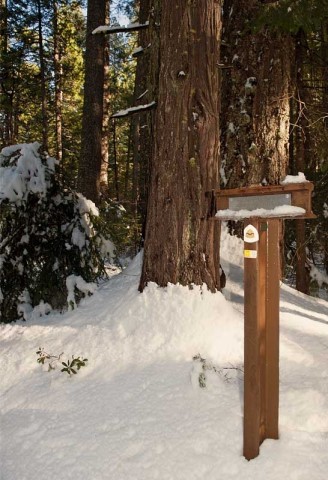 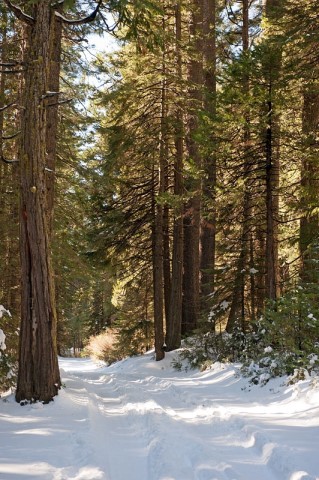 The winter road near Marker NC-4

"The roads getting better ... on this route ... we also passed some digings yesterday to our right on the Yuba River but I did not see them they are called Washington Digings." - Micajah Littleton, October 3, 1850

NO WATER ON WASHINGTON RIDGE

"We camped in the woods and chained our oxen to a tree and fed them a little hay that we got in the [Bear] valley for the purpose; we had no water for them, but got a little for ourselves by going a mile for it." - William B. Baker, August 31, 1852 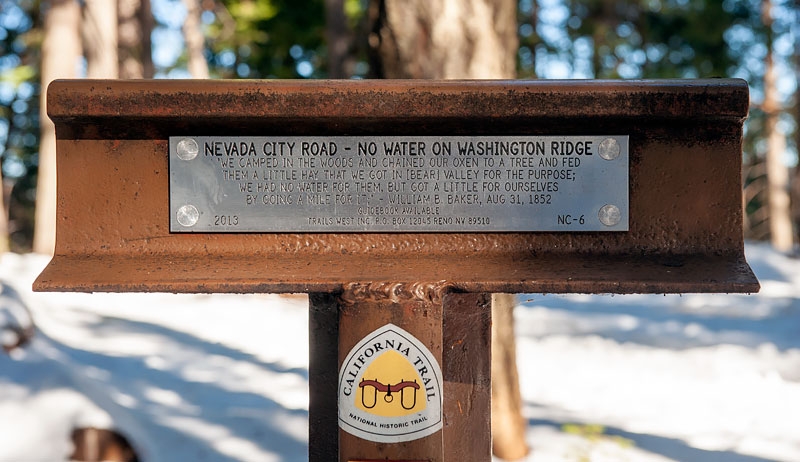 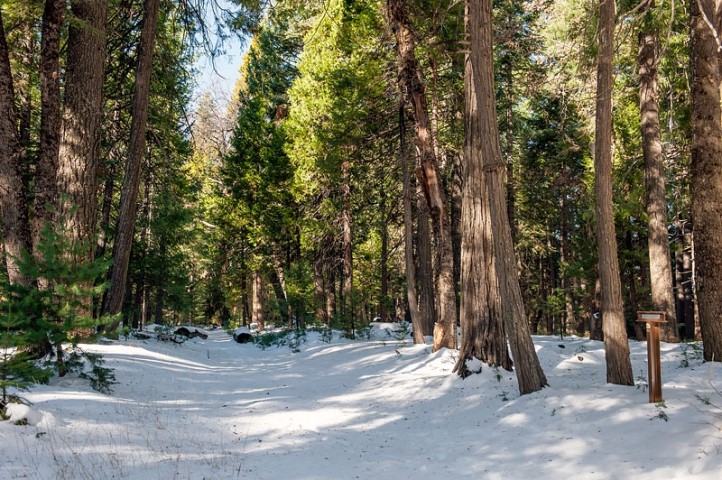 "Drove 15 miles and camped at the mountain cottage [Central house]. Tied our cattle up to the waggons as there was no feed to be had for them." - Edwin M. Primes, October 10, 1850

"Traveled 14 miles, a good road today; entered Nevada City a little after noon, where we found everything plenty and ourselves at home; we are now in the gold-diggings and settlements, so I will close my journal here." - William B. Baker, September 1, 1850

"We dared not let them browse among the trees lest, by feeding on the poison oak, it might prove ... fatal to them ... We therefore sought a place of greater safety ... through a forest of pine and cedar," - John Steele, September 22, 1850

Steele's diary can be viewed on Hathitrust. 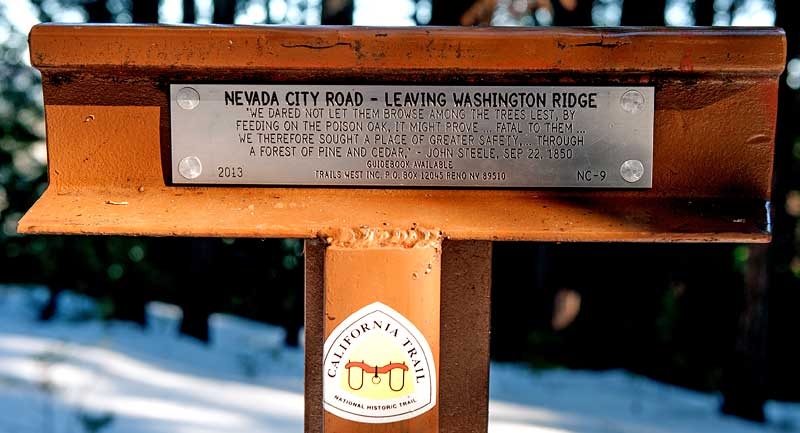 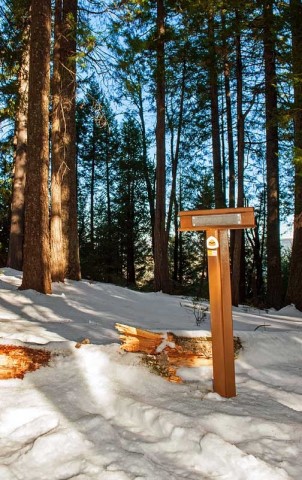 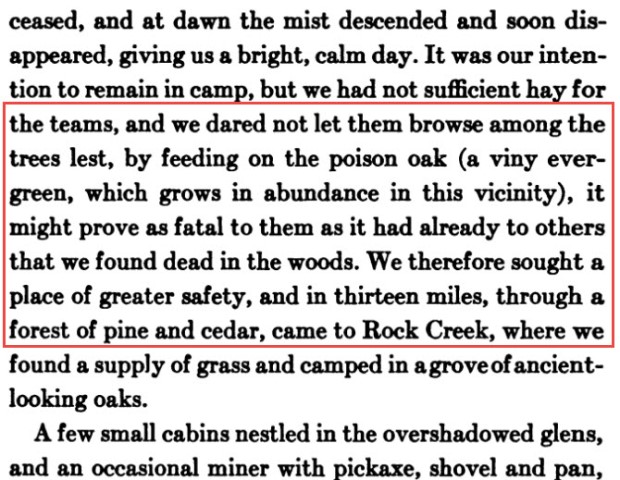 "We started from Cold Spring [Central House] in the morning and traveled 10 and came to Rock Creek and encamp and their was two trading houses we are now [within] 4 miles of Nevada City" - William P. Thompson, September 1, 1850

"East of ... [Nevada] City was a range of hills, which for a distance of over three miles was perforated with holes, and swarming with people ... They were known as the Coyote Diggins. Here were some of the richest mines ..." - John Steele, September 23, 1850

Steele's diary can be viewed on Hathitrust.

Henness Pass Marker HP-17 is located on the back side of this marker.

Go to the Henness Pass tour
You must have an internet or cellular connection to use Google Maps.
Travel Mode: