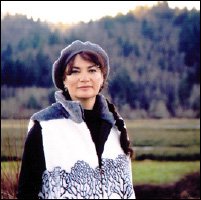 Peggy O’Neal – Peggy O’Neal’s extraordinary and frequently monumental murals and paintings celebrate and honor cultural diversity, the environment, and the history and traditions of Native Peoples. Peggy has developed her artistic style of energetic realism on a grand scale and is widely recognized for public art projects, corporate commissions, murals, and painted exhibits. Gifted with natural talents from an early age, she later advanced her skills with five years of extensive training at the San Francisco Academy of Art. Today, Peggy is the interpreter of visual history for many tribes in the Pacific Northwest. Each step of development for a commissioned painting by a Native American tribe is thoroughly researched by the artist and approved by tribal cultural council. Peggy’s paintings of Oregon and Northern California native Peoples and their traditions serve as a reminder of a rich cultural history, which as been kept alive and is now experience a rebirth. The artist lives in Bend, Oregon where she keeps an active schedule of commissioned work and also designs interpretive exhibits, murals, and dioramas for museums, permanent exhibits, and interpretive centers. Peggy’s contributions to the California Trail Interpretive Center include seven murals depicting life on the trail and at the gold diggings in California.