All of the quotes in this room are listed below. Where available, we've provided you with additional information about the source of the quote and possible links to download or access the original source material. The quotes are listed in the order in which you might encounter them in the room.

“we stood upon the Summit leavel of the Rocky Mountains [South Pass] … We are now upon the dividing Ridge or to use a more forcible figure ‘the Backbone of the North American Continent’ – And from which the waters flow into the Atlantic & Pacific Ocean.” – James A. Pritchard, June 18, 1849

This diary was published in 1959 as The Overland Diary of James A. Pritchard, from Kentucky to California in 1849; with a Biography of Captain James A. Pritchard by Hugh Pritchard Williamson. It was edited by Dale L. Morgan. No electronic access was located for this reference.

“In the afternoon we passed an Indian encampment numbering seventy tents. They belonged to the Sioux tribe, but were quite friendly…. We also had some small mirrors in gilt frames, and a number of other trinkets, with which we could buy fish and fresh buffalo, deer, and antelope meat. But money they would not look at.” – Margaret A. Frink, June 3, 1850

Margaret Frink's diary is considered one of the classic overland trail diaries and the original edition, published in 1897 by her husband, is considered quite valuable.

You may also be interested in the CTIC Plaza tour based on Margaret's diary.

Lucena Parsons was born in August, 1821 in the state of New York. Before marrying George Washington Parsons in March 1850, Lucena was a schoolteacher in Wisconsin. In the spring of 1850, Lucena and her husband started a cross country journey. They arrived in California one year later and settled in Oakland where they took up farming. Her diary is published in the Covered Wagon Women, volume 2, which may be available in the CTIC gift shop. No electronic access was located for this reference.

“The travel upon the roads drives [the bison] off …. [Indian] women are pinched with want and their children constantly cry out with hunger.” – Indian Agent Thomas Fitzpatrick, 1849

Thomas Fitzpatrick (1799 – 7 February 1854), known as "Broken Hand" (reportedly because his left hand had been mangled in a firearms accident), was a famous Irish-American "mountain man", "friend of the Indians", trailblazer and trapper with the Rocky Mountain Fur Company. With Jedediah Smith, he led a trapper band that discovered South Pass, Wyoming; however, before that Robert Stuart led the first known white party through the South Pass.

He shepherded the first two emigrant wagon trains to Oregon, including the Bartleson-Bidwell Party in 1841. He was the official guide to John C. Fremont on his second, and longest, expedition in 1843–44. He guided Col. Stephen W. Kearny and his Dragoons along the westward trails in 1845 to impress the Native Americans with their howitzers and swords.

Fitzpatrick helped negotiate the Fort Laramie treaty of 1851, at the largest council ever assembled of Native Americans of the Plains. He spoke Native American languages and deeply respected them as well. Among the most colorful and highly regarded of mountain men, Fitzpatrick was also party to many of the most important events in the expansion of the West.

“The Indian seemed neither frightened nor annoyed; on the contrary, he nodded and smiled at my familiar behavior. We did not try to converse with each other except by various signs and gestures.” – Heinrich Leinhard, September 6, 1846

Heinrich Lienhard (1822-1903), son of a Swiss farmer, sailed for America in 1843. After three years in the Midwest, Lienhard and four other young European immigrants set off by wagon for California, reaching John Sutter's New Helvetia in October 1846. After a few months in the U.S. Army, Lienhard returned to Sutter's settlement. In 1849 Lienhard returned to Switzerland to accompany Sutter's family to the New World. Disillusioned by the changed California he found in early 1850, Lienhard returned to Switzerland in July. A Pioneer at Sutter's fort (1941) is based on a diary kept in his years in California and focuses on John Sutter, his family, and his settlement on the Sacramento. It also covers Lienhard's experiences as a farmer and a miner and his crossings of Panama and the Atlantic in 1849-1850.

The quote above comes from the book From St. Louis to Sutter's Fort, a memoir of Lienhard's, and no electronic access is available for this book. However, it may be found in some research libraries (including that of the CTIC) and rare book dealers. A portion of his memoir is reprinted in the 1951 (vol. 19) Utah Historical Quarterly. Heinrich's other memoir, A Pioneer at Sutter's Fort, 1846-1850, can be accessed from the Library of Congress. 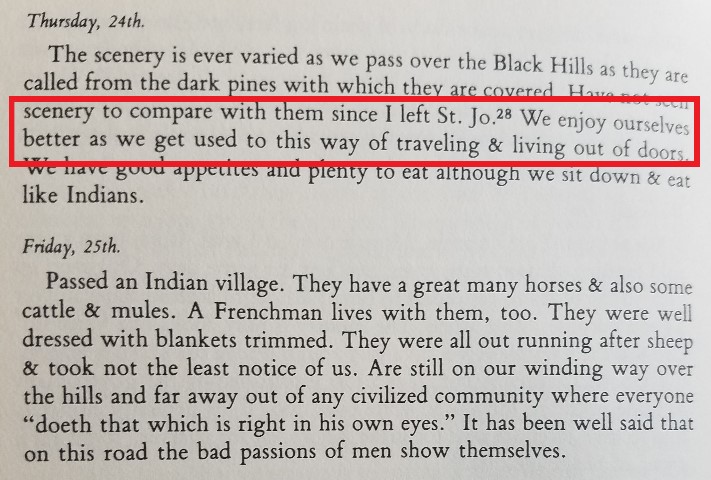 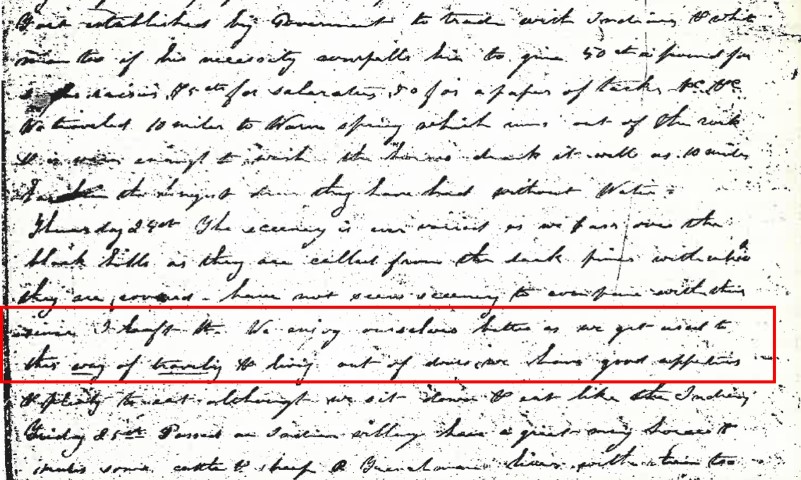 “We enjoy ourselves better as we get used to this way of traveling & living out of doors.” – Mary Stuart Bailey, June 24, 1852

Mary's diary appears in a collection of diaries published in 1980 as Ho for California! Women's Overland Diaries from the Huntington Library. No electronic access was located for this resource. Her handwritten journal, though, can be downloaded at the OCTA journal website.

“Company excessively tired from walking. I drive half the time & walk the other half. My feet are sore & much blistered.” – Daniel H. Budd, 1852

“Every night we encamped we locate quite a village but take it up the next day.” – Elizabeth Dixon Smith, June 19, 1847

Elizabeth Smith's diary was published in 1912 as part of T.T. Geer's book Fifty Years in Oregon. Geer writes, "For the purpose of illustrating to the younger generation the suffering experienced by thousands who came to Oregon in the early days, it is deemed well to incorporate here a few pages of extracts from a diary kept by a pioneer woman, Mrs. Elizabeth Smith, who crossed the plains in 1847.... Each night, after her eight children were asleep, she would write her notes for that day. She wrote it in a letter form the next year and sent it to some friends in Indiana... It is now the property of the State Historical Society, where it will be kept permanently as a valuable contribution to the history of Oregon as vividly portraying the hardships endured by those who laid the foundation for one of the greatest States in the Union."

Geer's book can be viewed on Hathitrust. Smith's diary is also published in Covered Wagon Women, Volume 1 and may be available in the CTIC gift shop.

“Had a fine day the men amused themselves a fishing and hunting and bathing in the pure clear stream while we women’s amusement was washing and cooking in the burning sun and over a hot fire.” – Mary Stone Smith, 1854

“The valley of the Platte for 200 miles; dotted with skeletons of buffalos; such a waste of the creatures God had made for man seems wicked, but every emigrant seems to wish to signalize himself by killing a buffalo.” – Isaac Foster, 1849

“Buffalo extended the whole length of our afternoon’s travel, not in hurds, but in solid phalanx. I estimated two million.” – William H. Kilgore, May 16, 1850

This quote is a combination of two entries from the May 16 & 17 entries. You can download William Kilgore's journal from the OCTA website.

“the lightening began to flash, the thunder roar and rain poured down upon us as if the windows of heaven were opened upon us … the wind blew so very hard that I thought the wagon would blow away.” – Belinda Cooley Pickett, 1853

“We struck buffalo on the Platte – by the millions it seemed – and we found the meat delicious.” – Nicholas “Cheyenne” Dawson, Reminiscence of 1841

A member of the Bidwell-Bartleson party, Dawson's memoir was published in 1969 under the title California in '41 Texas in '51. No electronic access was located for this reference.

“When we came in contact with Indians our people were so easily excited that if we had not had with us an old mountaineer the result would certainly have been disastrous.”

John Bidwell (1819-1900) was born in Chautaugua County, New York, and lived in Ohio when he decided to seek his fortune in California in 1841 and journeyed west as part of the first emigrant train going overland from Missouri to California. There he found work at Fort Sutter. He sided with governor Micheltorena in the 1844 revolt but aided the Bear Flag rebels in 1846. After serving with Fremont, he returned to Fort Sutter. Among the first to find gold on Feather River, Bidwell used his earnings to secure a grant north of Sacramento in 1849, and he spent the rest of his life as a farmer at "Rancho Chico," becoming a leader of the state's agricultural interests. A Democrat and Unionist during the Civil War, Bidwell served in the U.S. House, 1864-66, and was the Prohibition Party's candidate for governor (1890) and President (1892). Throughout his life in California, he was a friend to Native American tribes.

John Bidwell's Addresses and Reminiscences can be downloaded from the Library of Congress. These include a biographical sketch of Bidwell as well as Bidwell's own reminiscences and political speeches. The Bidwell first-person narrative interspersed through this volume is based on the text that first appeared serially in the Century Magazine in 1890. The first section of the memoir, journal entries for May 8-November 6, 1891, together with a summary of Bidwell's activities in the following months and a meteorological register for November 1841-April 1842, was published by a friend in Missouri some time in 1843 or 1844. ("A Journey to California" pp. [66-98]). Subsequent portions of the memoir were composed by Bidwell much later, probably in the late 1880s. Bidwell's memoirs focus on his overland journey to California and life in his new home state before the discovery of gold. He offers details of John Sutter and his colony, the Fremont expedition, Native Americans, California politics under Mexico, and early discoveries of gold.

“Take the regular wagon track and never leave it. It is barely possible to get through if you follow it and it may be impossible if you don’t.” – James Clyman, Reminiscence of 1846

This quote comes from the 1928 book James Clyman, American Frontiersman, 1792-1881, edited by Charles L. Camp. This book can be viewed on the Internet Archive.

The same reference is quoted in the outdoor plaza of the CTIC as well.

“I never could have believed we could have traveled so far with so little difficulty. Indeed, if I do not experience something far worse than I have done, I shall say the trouble is all in getting started.” – Tamsen Donner, 1846

Tamsen Donner, wife of George Donner, was a schoolteacher. She lost her life during the tragic winter of 1846/1847 in the Sierra Nevada mountains.