If you are pressed for time, or just want to revisit the content, this page allows you to view the text and images available on the interpretive panels in the Great Plains room.

The Platte River guided the emigrants for over 800 miles of their journey across the plains. The vast shimmering grassland of the eight-mile-wide Platte Valley and the edge of the sand hills looked like an ocean of green and gold. Clarity of the air and the flat landscape created deceptive distances and mirages, images that stayed elusively ahead of the travelers.

West of Fort Laramie the trail followed the Sweetwater River and gradually gained elevation to South Pass. Twenty miles further west, the trail divided at Parting of the Ways. The left fork continued southwest to Fort Bridger while the right fork cut a shorter route to the Bear River and Fort Hall.

Wide, shallow South Pass on the Continental Divide was the key to the entire overland route and its halfway point.

“we stood upon the Summit leavel of the Rocky Mountains [South Pass] … We are now upon the dividing Ridge or to use a more forcible figure ‘the Backbone of the North American Continent’ – And from which the waters flow into the Atlantic & Pacific Ocean.” – James A. Pritchard, 1849 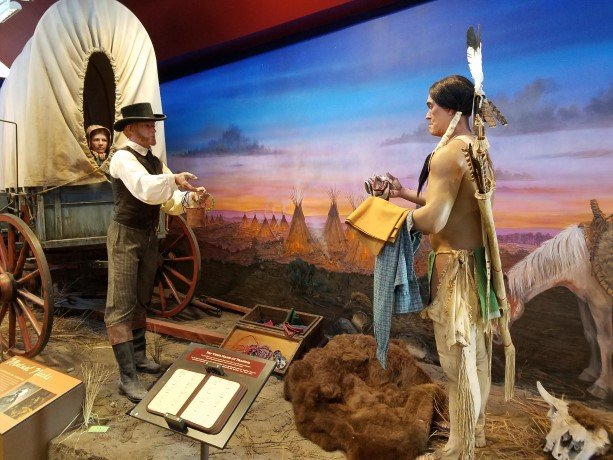 PEOPLE OF THE PLAINS

In the eastern and middle Platte Valley emigrants encountered Pawnee living in earthen-lodge villages. West of the Pawnee settlements to the upper Platte region lived Lakota, Cheyenne, Arapaho, and Crow. These nomadic hunters required substantial numbers of horses for hunting, warfare, and transportation of household items as they followed the migrating bison herds. Plains tribes hunted bison, elk, deer, and other animals and gathered wild plants to supplement their food.

Bison supplied food as well as materials for clothing, tools, and weapons among many other daily needs. Hides became tipis, and other parts of the animal were used in religious ceremonies.

“In the afternoon we passed an Indian encampment numbering seventy tents. They belonged to the Sioux tribe, but were quite friendly…. We also had some small mirrors in gilt frames, and a number of other trinkets, with which we could buy fish and fresh buffalo, deer, and antelope meat. But money they would not look at.” – Margaret Frink, 1850

Emigration along the Platte River Road transformed the Plains Indians' way of life. During early years, Indians often aided emigrants in a variety of ways. As the number of emigrants increased, bringing destruction of natural resources and diseases that would devastate the tribes, relations between the two groups worsened, often resulting in violence.

The U.S. Army was brought in to protect emigrants on the road and several treaties were signed between the tribes and the government. Peace did not come until the 1890s after the bison had been hunted to the brink of extinction and the tribes forced onto government-controlled reservations.

The steady stream of emigrant wagons seemed unending to the native tribes. One tribesman pointed to the east and asked, "Are there still any whites remaining there?"

A Cheyenne ledger drawing depicts a wagon train on the trail through mountains and an Indian village in the trees along the stream. The stream clearly marks the separation between the disruption of the emigrants and the peaceful setting of the camp.

“The travel upon the roads drives [the bison] off …. [Indian] women are pinched with want and their children constantly cry out with hunger.” – Indian Agent Thomas Fitzpatrick, 1849

THE LANGUAGE OF BUSINESS

Emigrants and Indians often found reason to trade useful and necessary items with one another along the California Trail, and used sign language to do so. However, overcoming the language barrier was only half of the difficulty in such dealings. Both Indians and emigrants came from cultures that held a deep distrust of one another. Through trade both Native Americans and the whites passing through their lands faced their apprehensions and often left their negotiations not only with something they needed, but with a new understanding of one another. Using only your hands, how would you tell someone you would like to trade something with them?

“The Indian seemed neither frightened nor annoyed; on the contrary, he nodded and smiled at my familiar behavior. We did not try to converse with each other except by various signs and gestures.” – Heinrich Leinhardt, 1846

Immense herds of bison sometimes blocked the way of the emigrants. One train waited two hours for a stampeding herd to pass. The emigrant's first reaction was to temporarily abandon the journey and rush off and shoot a buffalo, not for food, but for sport, leaving the carcass to rot.

By the 1850s, demand for hunting opportunities and desire for buffalo robes by emigrants and tourists led to wholesale slaughter of bison. The rapid disappearance of the bison during the migration and the dependence of the Plains tribes on them resulted in increased tensions between the emigrants and Indians.

“The valley of the Platte for 200 miles; dotted with skeletons of buffalos; such a waste of the creatures God had made for man seems wicked, but every emigrant seems to wish to signalize himself by killing a buffalo.” – Isaac Foster, 1849

“Buffalo extended the whole length of our afternoon’s travel, not in hundreds, but in solid phalanx. I estimated two million.” – William H. Kilgore, 1850 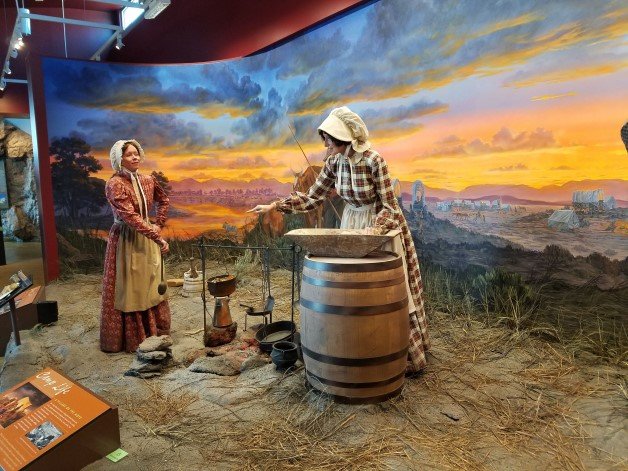 HOME ON THE RANGE

By mid June most emigrant companies reached Fort Laramie, 550 miles west of the Missouri River jumping-off places. After five weeks on the trail evening camps had attained their own rhythm of life. Animals needed looking-after and domestic work had to be done before emigrants could take heart in small reminders of home. Familiar songs and dances lightened their spirits, and a warm meal restored their optimism for the future.

A DAY ON THE TRAILS

Before daybreak women prepared breakfast, while men collected straying or lost animals. After a morning drive of several miles, a midday stop known as "nooning" allowed travelers to eat and rest before continuing to the evening camp. Fifteen miles a day was average, but actual number of miles traveled depended on terrain, draft animals, and weather.

Crossing streams created special challenges. On wide rivers, wagons floated across after wheels were removed. On other rivers, people, wagons, and goods ferried across on crude skiffs or rafts, while the livestock swam over. The specter of being swept away by the current or losing property to water damage haunted each crossing.

“We enjoy ourselves better as we get used to this way of traveling & living out of doors.” – Mary Stuart Bailey, 1852

“Company excessively tired from walking. I drive half the time & walk the other half. My feet are sore & much blistered.” – Daniel H. Budd, 1852

A VILLAGE ON THE MOVE

After a long tedious day of travel, a resting place seemed heaven-sent. Good campsites required water for people and animals, fuel for cooking fires, and grass for livestock. At the end of the day, music, games, and storytelling provided a backdrop for the ongoing drama of relationships that evolved along the journey. Affairs, courtships, weddings, and even desertion of spouses occurred in the overland camps as regularly as at home.

“Every night we encamped we locate quite a village but take it up the next day.” – Elizabeth Dixon Smith, 1847

“Had a fine day the men amused themselves a fishing and hunting and bathing in the pure clear stream while we women’s amusement was washing and cooking in the burning sun and over a hot fire.” – Mary Stone Smith, 1854

Uninsulated, low-strung telegraph wires increased the danger from lightning. Oxen passing too near the telegraph line during storms were sometimes killed.

“the lightening began to flash, the thunder roar and rain poured down upon us as if the windows of heaven were opened upon us … the wind blew so very hard that I thought the wagon would blow away.” – Belinda Cooley Pickett, 1853

FIRST ON THE TRAIL

Because they were the first wagon train, the Bidwell-Bartleson Party sometimes had to dig, shovel, or move rocks to make the road passable. They faced a buffalo stampede, a storm the covered the ground with four inches of hail, and a tornado. Despite these natural disasters, the first emigrant fatality occurred near Ash Hollow in Nebraska, when George Shotwell accidentally shot himself while pulling a gun out of a wagon by its barrel.

“When we came in contact with Indians our people were so easily excited that if we had not had with us an old mountaineer the result would certainly have been disastrous.” – John Bidwell, Reminiscence of 1841

Thomas "Broken Hand" Fitzpatrick guided the Bidwell-Bartleson Party and Jesuit missionaries along the Platte River, the Sweetwater River, and through South Pass. Their route, long known to traders and explorers, became the emigrant overland trail.

“We struck buffalo on the Platte – by the millions it seemed – and we found the meat delicious.” – Nicholas “Cheyenne” Dawson, Reminiscence of 1841

Listen to the Bidwell/Bartleson story from the Great Plains. 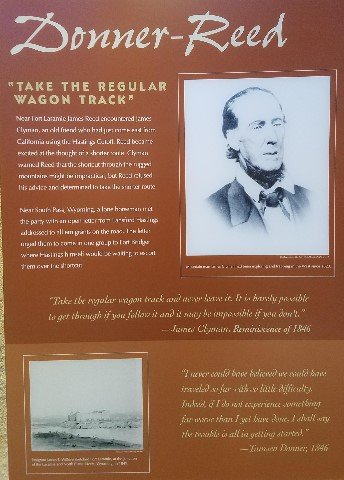 Near Fort Laramie James Reed encountered James Clyman, and old friend who had just come east from California using the Hastings Cutoff. Reed became excited at the thought of a shorter route. Clyman warned Reed that the shortcut through the rugged mountains might be impractical, but Reed refused his advice and determined to take the shorter route.

Near South Pass, Wyoming, a lone horseman met the party with an open letter from Lansford Hastings addressed to all emigrants on the road. The letter urged them to come in one group to Fort Bridger where Hastings himself would be waiting to escort them over the shortcut.

“Take the regular wagon track and never leave it. It is barely possible to get through if you follow it and it may be impossible if you don’t.” – James Clyman, Reminiscence of 1846

“I never could have believed we could have traveled so far with so little difficulty. Indeed, if I do not experience something far worse than I have done, I shall say the trouble is all in getting started.” – Tamsen Donner, 1846

Listen to the Donner/Reed story from the Great Plains. 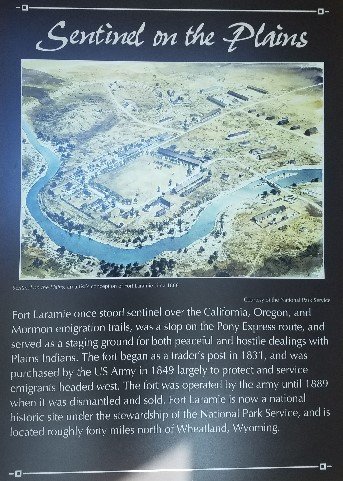 Fort Laramie once stood as sentinel over the California, Oregon, and Mormon emigration trails, was a stop on the Pony Express route, and served as a staging ground for both peaceful and hostile dealings with Plains Indians. The fort began as a trader's post in 1831, and was purchased by the U.S. Army in 1849 largely to protect and service emigrants headed west. The fort was operated by the army until 1889 when it was dismantled and sold. Fort Laramie is now a national historic site under the stewardship of the National Park Service, and is located roughly forty miles north of Wheatland, Wyoming.

Emigrants on the trail, like their Indian counterparts, tended to wear the same clothing every day so durability mattered. Emigrant clothing was mainly wool, cotton, linen, or other tough fabrics designed to be functional in a variety of conditions. Indian clothes were often made from the hides of animals rendered soft through a process called brain tanning. Hides of elk, deer, and antelope were commonly used to make dresses, shirts and leggings. Bison robes might be worn in severe weather. It was common for emigrants and Indians to trade clothing and material; consequently it was not unusual to see an emigrant wearing moccasins or an Indian sporting a top hat.

Emigrant wardrobes commonly contained a variety of wool clothing. Unlike cotton or linen, wool acts as a "temperature regulator" by shedding outside moisture while, at the same time, absorbing perspiration away from the skin. This makes wool a good choice in both cold and warm conditions. Wool is fire resistant which is an advantage if you are working around campfires. The down side is that wool is itchy. Emigrant cotton shirts often had long tails to help ease the itch.

“The Emigrating dress is anything but dressy…. the style of emigrant dress [is] all for comfort – nothing for show.” – Hamet Hubbard Case, 1859

Continue the Tour in the Great Basin Room