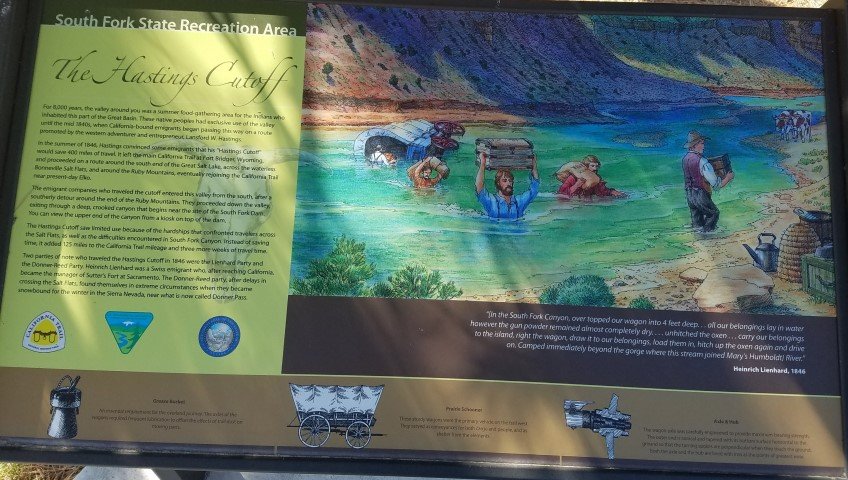 For 8,000 years, the valley around you was a summer food-gathering area for the Indians who inhabited this part of the Great Basin. These native peoples had exclusive use of the valley until the mid 1840s, when California-bound emigrants began passing this way on a route promoted by the western adventurer and entrepreneur, Lansford W. Hastings.

In the summer of 1846, Hastings convinced some emigrants that his "Hastings Cutoff" would save 400 miles of travel. It left the main California Trail at Fort Bridger, Wyoming, and proceeded on a route around the south end of the Great Salt Lake, across the waterless Bonneville Salt Flats, and around the Ruby Mountains, eventually rejoining the California Trail near present-day Elko.

The emigrant companies who traveled the cutoff entered this valley from the south, after a southerly detour around the end of the Ruby Mountains. They proceeded down the valley exiting through a deep, crooked canyon that begins near the site of the South Fork Dam. You can view the upper end of the canyon from a kiosk on top of the dam.

The Hastings Cutoff saw limited use because of the hardships that confronted travelers across the Salt Flats, as well as the difficulties encountered in South Fork Canyon. Instead of saving time, it added 125 miles to the California Trail mileage and three more weeks of travel time.

Two parties of note who traveled the Hastings Cutoff in 1846 were the Lienhard Party and the Donner-Reed Party. Heinrich Lienhard was a Swiss emigrant who, after reaching California, became the manager of Sutter's Fort in Sacramento. The Donner-Reed party, after delays in crossing the Salt Flats, found themselves in extreme circumstances when they became snowbound for the winter in the Sierra Nevada, near what is now called Donner Pass. 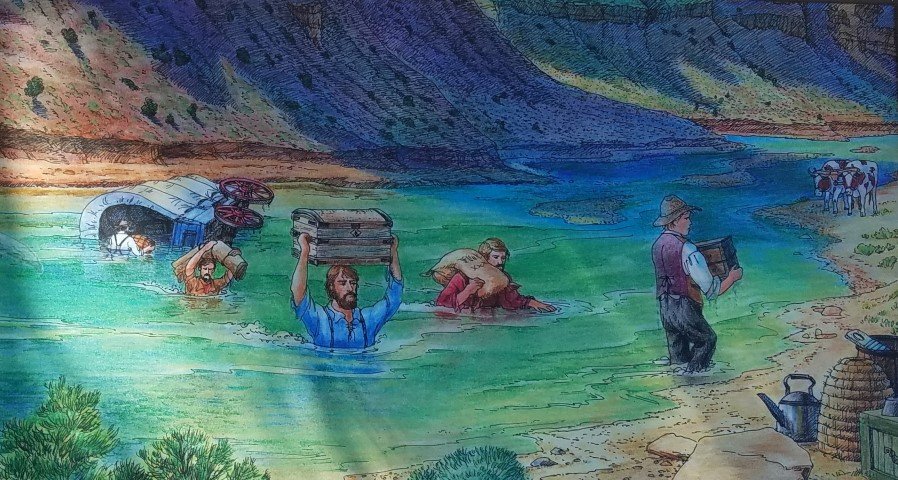 "[In] the South Fork Canyon, over topped our wagon into 4 feet deep... all our belongings lay in water however the gun powder remained almost completely dry.... unhitched the oxen ... carry our belongings to the island, right the wagon, draw it to our belongings, load them in, hitch up the oxen again and drive on. Camped immediately beyond the gorge where this stream joined Mary's [Humboldt] River." - Heinrich Lienhard, 1846 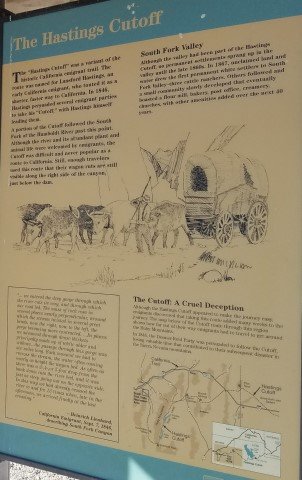 The "Hastings Cutoff" was a variant of the historic California emigrant trail. The route was named for Lansford Hastings, an early California emigrant, who touted it as a shorter, faster way to California. In 1846, Hastings persuaded several emigrant parties to take his "Cutoff," with Hastings himself leading them.

A portion of the Cutoff followed the South Fork of the Humboldt River past this point. Although the river and its abundant plant and animal life were welcomed by emigrants, the Cutoff was difficult and never popular as a route to California. Still, enough travelers used this route that their wagon ruts are still visible along the right side of the canyon, just below the dam.

Although the valley had been part of the Hastings Cutoff, no permanent settlements sprang up in the valley until the late 1860s. In 1867, unclaimed land and water drew the first permanent white settlers to South Fork Valley - three cattle ranchers. Others followed and a small community slowly developed that eventually boasted a flour mill, bakery, post office, creamery, churches, with other amenities added over the next 40 years. 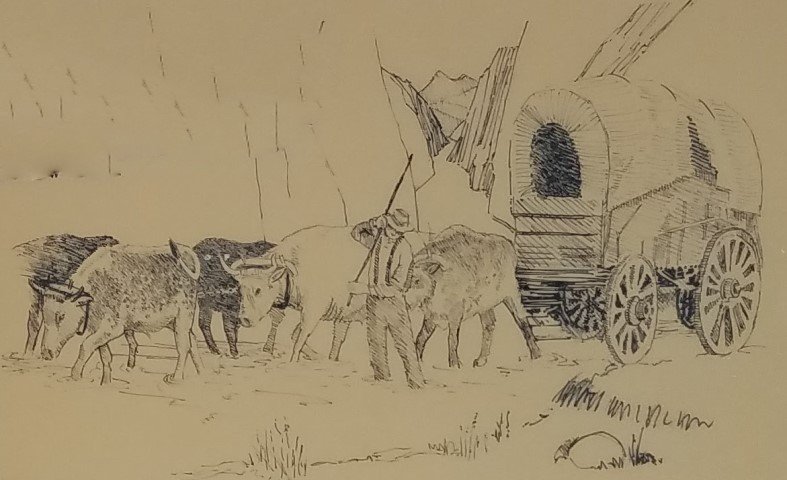 "... we entered the deep gorge through which the river cuts its way, and through which our road led. The mass of rock rose in several places nearly perpendicular, around which the stream twisted in several great bends, now the right, now to the left, the gorge becoming more contracted. ... In places we advanced through dense thickets principally made up of white alder and willows... the passage through this gorge was six miles long. Each moment we had to recross the stream, the water often coming nearly as height the wagon bed. As often as there was a 3-, 4-, or 5-foot drop from the bank down into the river bed, and it was just as steep going out on the opposite side. In this way we had already crossed the river to and fro 13 times when, late in the afternoon, we arrived finally at the last crossing." - Heinrich Lienhard, California Emigrant, September 7, 1846, describing South Fork Canyon.

The Cutoff: A Cruel Deception

Although the Hastings Cutoff appeared to make the journey easy, emigrants discovered that taking this route added many weeks to the journey. The map below of the Cutoff route through this region shows how far out of their way emigrants had to travel to get around the Ruby Mountains.

In 1846, the Donner-Reed Party was persuaded to follow the Cutoff, losing valuable time that contributed to their subsequent disaster in the Sierra Nevada mountains. 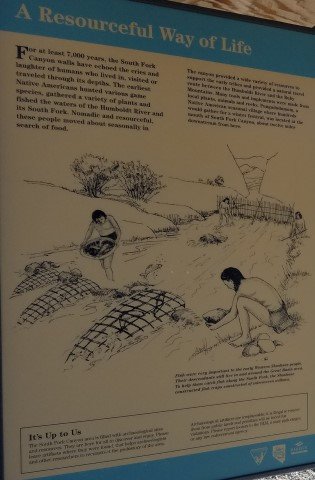 A Resourceful Way of Life

For at least 7,000 years, the South Fork Canyon walls have echoed the cries and laughter of humans who live in, visited or traveled through its depths. The earliest Native Americans hunted various game species, gathered a variety of plants and fished the waters of the Humboldt River and its South Fork. Nomadic and resourceful, these people moved about seasonally in search of food.

The canyon provided a wide variety of resources to support the early tribes and provided a natural travel route between the Humboldt River and the Ruby Mountains. Many tools and implements were made from local plants, animals and rocks. Pungududumoin, a Native American seasonal village where hundreds would gather for a winter festival, was located at the mouth of South Fork Canyon, about twelve miles downstream from here. 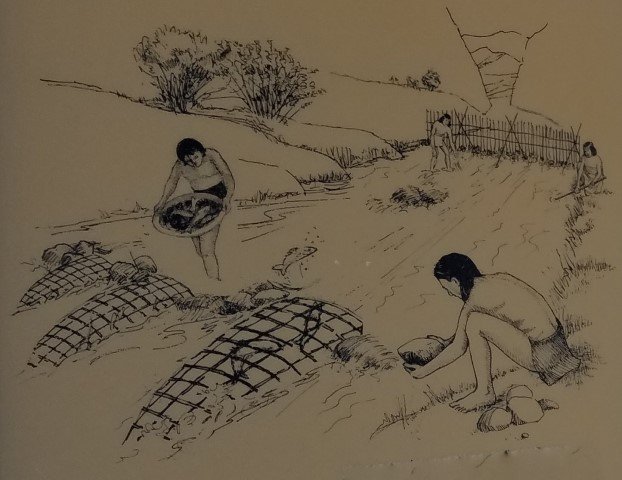 Fish were very important to the early Western Shoshone people. Their descendants still live in and around the Great Basin area. To help them catch fish along the South Fork, the Shoshone constructed fish traps constructed of interwoven willows.

The South Fork Canyon area is filled with archaeological sites and resources. They are here for all to discover and enjoy. Please leave artifacts where they were found; that helps archaeologists and other researchers to reconstruct the prehistory of the area. Archaeological artifacts are irreplaceable; it is illegal to remove them from public lands and penalties will be levied for violations. Please report looters to the BLM, a state park ranger, or any law enforcement agency. 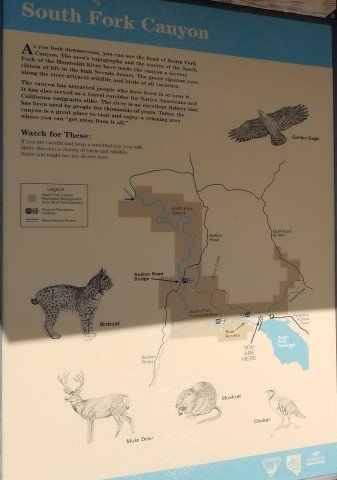 As you look downstream, you can see the head of South Fork Canyon. The area's topography and the waters of the South Fork of the Humboldt River have made the canyon a diverse ribbon of life in the high Nevada desert. The green riparian zone along the river attracts wildlife and birds of all varieties.

The canyon has attracted people who have lived in or near it. It has also served as a travel corridor for Native Americans and California emigrants alike. The river is an excellent fishery that has been used by people for thousands of years. Today, the canyon is a great place to visit and enjoy - a relaxing area where you can "get away from it all."

If you are careful and keep a watchful eye, you will likely discover a variety of birds and wildlife. Some you might see are shown here. 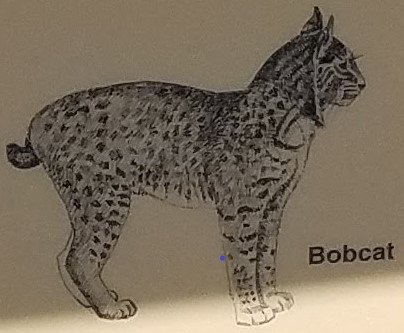 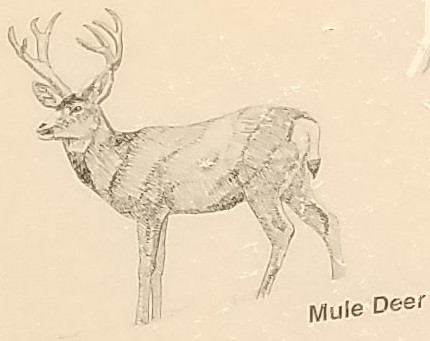 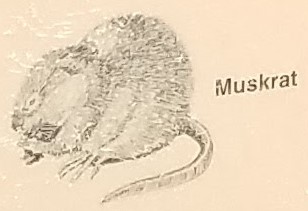 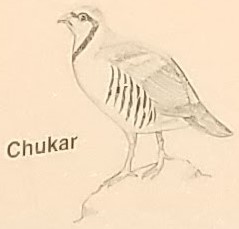 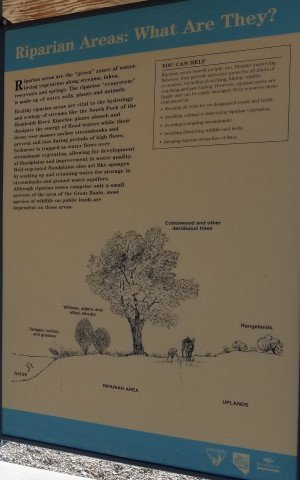 Riparian Areas: What Are They?

Riparian areas are the "green" zones of water-loving vegetation along streams, lakes, reservoirs and springs. The riparian "ecosystem" is made up of water, soils, plants and animals.

Healthy riparian areas are vital to the hydrology and ecology of streams like the South Fork of the Humboldt River. Riparian plants absorb and dissipate the energy of flood waters while their dense root masses anchor streambanks and prevent soil loss during periods of high flows. Sediment is trapped as water flows over streambank vegetation, allowing for development of floodplains and improvement in water quality. Well-vegetated floodplains also act like sponges, soaking up and retaining water for storage in streambanks and ground water aquifers. Although riparian zones comprise only a small percent of the Great Basin, most species of wildlife on public lands are dependent on these areas.

Riparian zones benefit people, too. Besides improving fisheries, they provide attractive areas for all kinds of recreation, including picnicking, hiking, wildlife watching and just loafing! However, riparian areas are fragile and can be easily damaged. Help conserve these vital zones by: 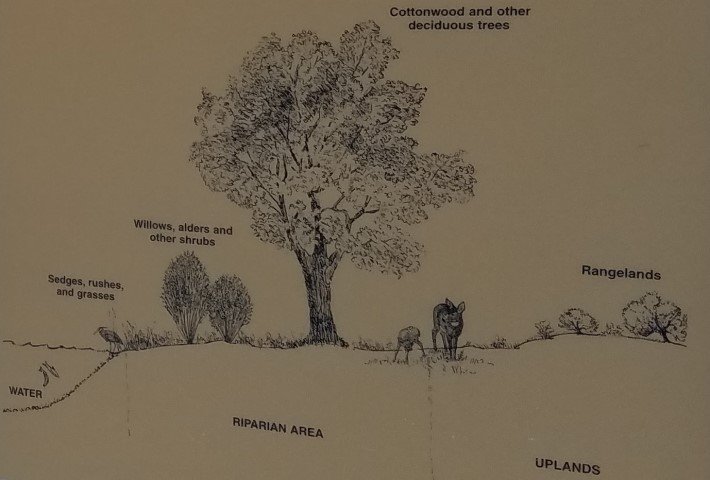 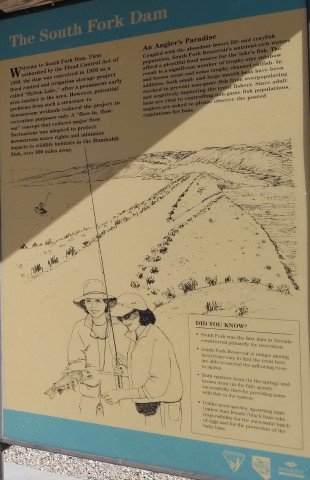 Welcome to South Fork Dam. First authorized by the Flood Control Act of 1938, the dam was conceived in 1950 as a flood control and irrigation storage project called "Hylton Lake," after a prominent early area rancher in the area. However, potential problems from such a structure to downstream wetlands reduced the project to recreation purposes only. A "flow-in, flow-out" concept that reduces major flow fluctuations was adopted to protect downstream water rights and minimize impacts to wildlife habitats in the Humboldt Sink, over 200 miles away.

Coupled with the abundant insect and crayfish population, South Fork Reservoir's nutrient-rich waters afford a plentiful food source for the lake's fish. The result is a significant number of trophy-size rainbow and brown trout and some trophy channel catfish. In addition, both small- and large-mouth bass have been stocked to prevent non-game fish from overpopulating and negatively impacting the trout fishery. Since adult bass are vital to controlling non-game fish populations, anglers are asked to please observe the posted regulations for bass. 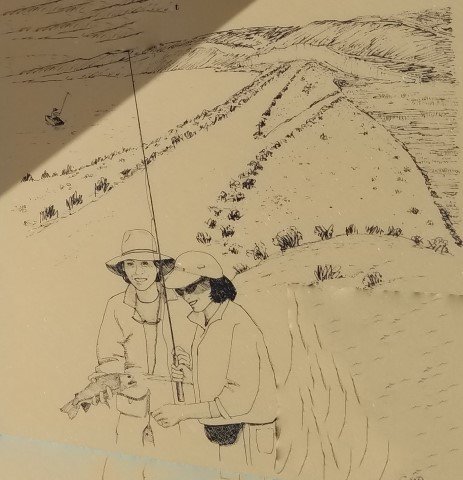 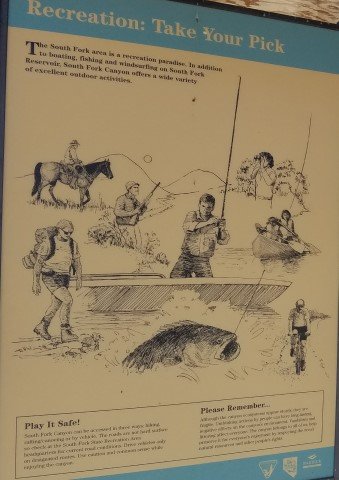 The South Fork area is a recreation paradise. In addition to boating, fishing and windsurfing on South Fork Reservoir, South Fork Canyon offers a wide variety of excellent outdoor activities. 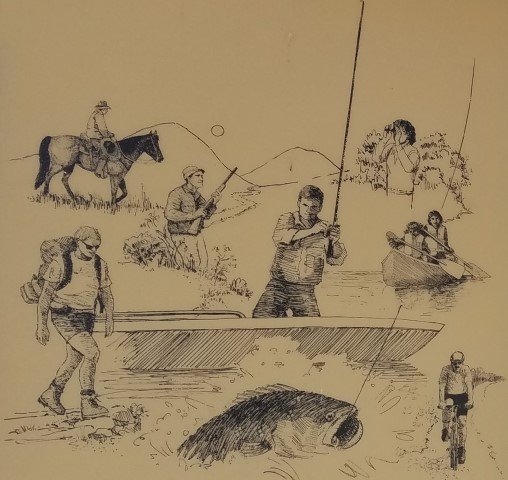 South Fork Canyon can be accessed in three ways: hiking, rafting/canoeing or by vehicle. The roads are not hard surface so check at the South Fork State Recreation Area headquarters for current road conditions. Drive vehicles only on designated routes. Use caution and common sense while enjoying the canyon.

Although the canyon ecosystems appear sturdy, they are fragile. Unthinking actions by people can have long-lasting, negative effects on the canyon's environment. Vandalism and littering affect everyone. The canyon belongs to all of us; help preserve it for everyone's enjoyment by respecting the area's natural resources and other people's rights.