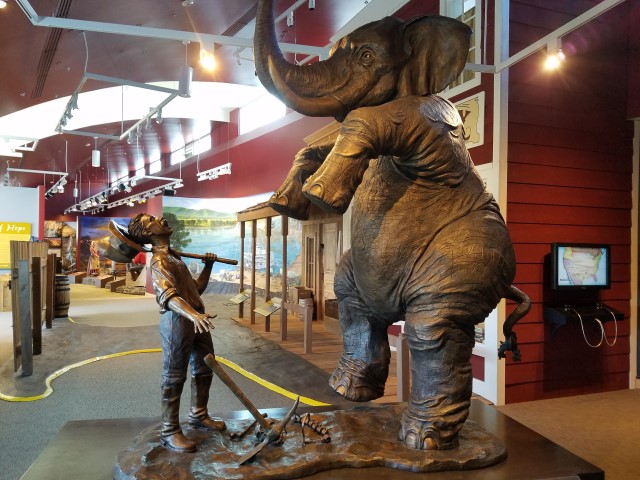 Have you seen the elephant? 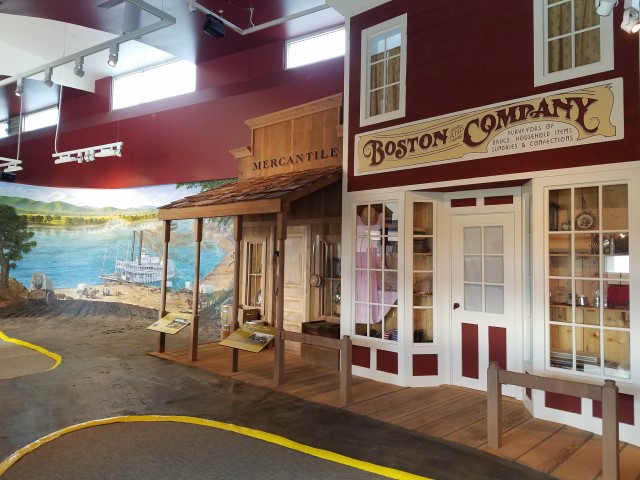 The "shops" for supplying your journey 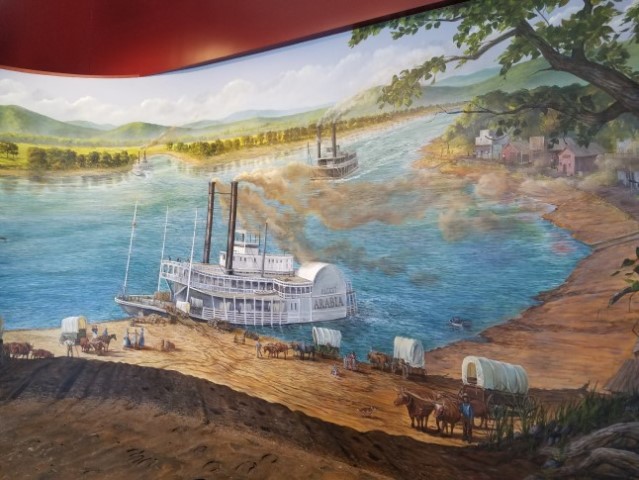 The Jumping Off Town mural showing the steamboat Arabia 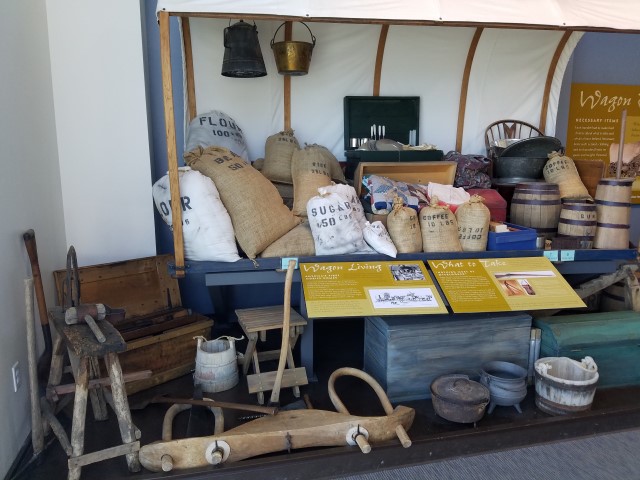 How full will your wagon be?

While people from all over the eastern United States and the world traveled along the California Trail, the official starting points of the trail were the Jumping Off towns along the Missouri River. Towns such as St. Joseph and Independence, Missouri and Council Bluffs, Iowa served as the emigrants’ final chance to stock their wagons with all the necessary supplies and prepare for the 2,000-mile journey. Prior to 1846, Independence was the most popular jumping off town for those heading west. As Gold Rushers began preparing for the journey west, being a jumping off town became a very lucrative business. Unlike those who used the California Trail before the discovery of gold, the men seeking gold were most often not farmers and hailed from cities and urban areas. This meant that many of them were using commercial transportation, like steamboats, to reach these starting points along the Missouri River and then outfitting their wagons for the journey once they had arrived. Given many of their backgrounds, most of the 49ers did not have any idea what was considered a reasonable price for a wagon, oxen and the supplies necessary for the journey. Prices in the jumping off towns quickly sky rocketed and became inflated as the outfitters took advantage of the gold seekers' lack of knowledge.

In an attempt to lure emigrants to their town, the newspapers in St. Joseph and Independence began promoting the services offered in their towns. They also advertised the benefits of the trail leaving their town to join the California Trail. As the rivalry between St. Joseph and Independence grew, the advertising campaigns became more aggressive. The St. Joseph Gazette relied on printing praise from the well-known travelers who had used their route heading east and west. They wrote that people like General Stephen W. Kearney, escorting John C. Fremont to his court martial in 1847, and Moses “Black” Harris, the famous mountain man and trail guide of 1844 had each utilized the facilities in St. Joseph on their overland journeys. Independence had joined in the name-dropping game as well citing people who had traveled with John C. Fremont in 1843. The St. Joseph paper proclaimed that starting from their town meant avoiding the dangerous crossings of the Kansas River on the Independence route. The Independence Expositor claimed that the St. Joe road was almost “impassable”, and the Independence road was “plain, level and beautiful”. The Independence paper also tended to highlight cases of cholera and failed river crossings in St. Joseph. Eventually, it became clear that St. Joseph’s aggressive advertising was successful, and they were the more popular jumping off point.

In the high traffic years of the westward trails the jumping off towns were filled to bursting every spring. They were full of emigrants outfitting their wagons, waiting for the grass to grow on the plains and standing by until their turn came to ferry across the Missouri River. In 1849, Alonzo Delano wrote, “Our goods and wagon were soon landed, and as every public house in town was crowded by emigrants to overflowing, (having a portable cooking stove,) we slept and messed in our wagon, in one of the back streets; and up to Sunday night, all were enjoying our usual health.”

Alonzo's diary can be viewed and downloaded from the Library of Congress.

Many of the emigrants also made note of the exorbitant prices in the jumping off towns. Eleazer Stillman Ingalls wrote, “St. Joseph is quite a village, and doing a great deal of business at this time. But the way they fleece California emigrants is worth noticing. I should advise all going the overland route to take every thing along with them that they can of small weight, as every little thing costs three or four times as much here as at home. The markets are filled with broken down horses jockeyed up for the occasion, and unbroken mules, which they assure you are handy as sheep. It is the greatest place for gambling, and all other rascality that I was ever in.”

Ingalls' diary can be viewed and downloaded here.

Elijah Allen Spooner expressed similar sentiments in 1849 when he wrote. “Independence is situated on high ground about three miles from the Missouri River. It has a population of about two thousand souls, though at this time than the numbers are very much increased. The town is nearly all built of brick which gives it a very substantial appearance. And the crowd of emigrants that are congregated here, finishing up their outfit, gives it the air of a great business emporium, In fact their trade this spring must be extremely heavy, not only in goods & provisions, but in oxen & mules: thus affording an outlet, at high prices, for the surplus products of the country which they have never before seen”

Spooner's letters and diary can be viewed and downloaded from the Brigham Young University Library.