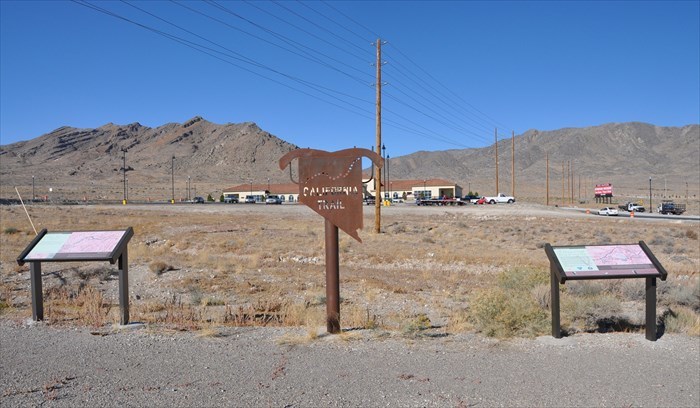 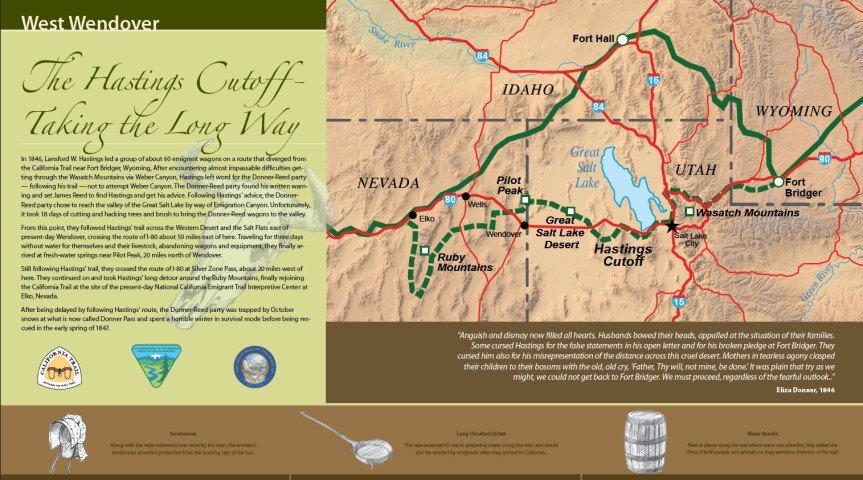 In 1846, Lansford W. Hastings led a group of about 60 emigrant wagons on a route that diverged from the California Trail near Fort Bridger, Wyoming, After encountering almost impassable difficulties getting through the Wasatch Mountains via Weber Canyon, Hastings left word for the Donner-Reed party — following his trail — not to attempt Weber Canyon. The Donner-Reed party found his written warning and set James Reed to find Hastings and get his advice. Following Hastings’ advice, the Donner-Reed party chose to reach the valley of the Great Salt Lake by way of Emigration Canyon. Unfortunately, it took 18 days of cutting and hacking trees and brush to bring the Donner-Reed wagons to the valley.

From this point, they followed Hastings’ trail across the Western Desert and the Salt Flats east of present-day Wendover, crossing the route of I-80 about 50 miles east of here. Traveling for three days without water for themselves and their livestock, abandoning wagons and equipment, they finally arrived at fresh-water springs near Pilot Peak, 20 miles north of Wendover.

Still following Hastings’ trail, they crossed the route of I-80 at Silver Zone Pass, about 20 miles west of here. They continued on and took Hastings’ long detour around the Ruby Mountains, finally rejoining the California Trail at the site of the present-day National California Emigrant Trail Interpretive Center at Elko, Nevada.

After being delayed by following Hastings’ route, the Donner-Reed party was trapped by October snows at what is now called Donner Pass and spent a horrible winter in survival mode before being rescued in the early spring of 1847.

“Anguish and dismay now filled all hearts. Husbands bowed their heads, appalled at the situation of their families. Some cursed Hastings for the false statements in his open letter and for his broken pledge at Fort Bridger. They cursed him also for his misrepresentation of the distance across this cruel desert. Mothers in tearless agony clasped their children to their bosoms with the old, old cry, 'Father, Thy will, not mine, be done.' It was plain that try as we might, we could not get back to Fort Bridger. We must proceed, regardless of the fearful outlook.” - Eliza Donner, 1846

Eliza's reminiscence can be read at Genealogy Trails.